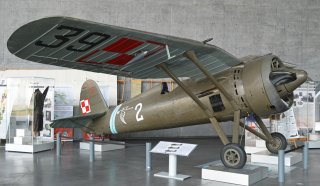 When Nazi Germany invaded Poland in 1939, there were was little reason to believe that the Eastern European nation could hold out for more than a few weeks. It was the proverbial “David” facing the might of “Goliath” and while it didn’t have a biblical ending, the Poles put up much more of a fight than Germany likely expected. This was especially true in the air where Poland’s antiquated aircraft held their own against the German Luftwaffe’s modern fighters.

The Germans didn’t just have “better” aircraft, they had the numbers, and when the invasion began the Luftwaffe was equipped with around 850 Messerschmitt Bf 109 fighter aircraft. By contrast, Poland had less than 325 of its PZL P.11 fighter aircraft. It was hardly what anyone would call a fair fight.

The PZL P.11 was essentially a throw-back to another era. It was a high-wing monoplane with an open-air cockpit and fixed undercarriage landing area. It may have featured an aerodynamically refined shape with a metal-skin, and was certainly modern compared to fabric-over-wood biplanes of World War I, but it was no match for the German fighter aircraft with their enclosed cockpits and retractable undercarriages.

Surprisingly, thanks to the bravery of the pilots who flew the PZL P.11, the aircraft held its own. It handled well, held comparable armament of its adversaries and proved to be an agile gunnery platform. Each of its two 7.92-millimeter machine guns was able to do considerable damage to the German fighter aircraft and bombers that faced the PZL P.11. The Polish fighter could also take-off from short landing strips, which made it ideal for operating from improvised fields. The biggest downside was that despite its all-metal airframe there was no armor to protect the pilot.

The single-seat fighter was initially powered by a Bristol Mercury V.S2 9-cyl. air-cooled radial piston engine, 420 kilowatts (560 horsepower) or 1x 481 kW (645 horsepower) Polish Skoda Works Mercury VI.S2. Subsequent variants also featured a more powerful engine, but even in its original configuration it could reach speeds of 240 miles per hour and had an absolute ceiling greater than 36,000 feet.

During the fighting with Germany, the P.11 was responsible for downing 126 Luftwaffe aircraft including 10 Bf 109s and 13 Bf 110s. Only 26 P.11 fighters were destroyed in combat by German fighter aircraft. However, it was a PZL P.11 that has the dubious distinction of being the first Allied aircraft to be shot down by a German aircraft, yet the Polish plane also scored the first Allied air victory when Władysław Gnyś—who went on to become a fighter ace—shot down two German Dornier Do 17 bombers in the first day of fighting on September 1, 1939.

Most of Poland’s P.11s were destroyed on the ground, but some thirty-six were provided to the Romanian Air Force and used in training. Those aircraft were reportedly scrambled to meet American attacks on the Ploesti refinery in 1944 but did no damage to the American bombers.

The sole surviving PZL P.11 is no on display at the Polish Aviation Museum in Kraków. It serves as a reminder of the tenacity of those Polish pilots who defended their homeland from the Nazis.