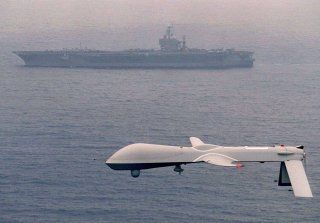 It's not a rare sight in American cities for a drone to fly overhead, whether it belongs to a hobbyist, a professional photographer, or law enforcement. Earlier this spring, several cities around the world deployed drones in order to broadcast messages about the importance of social distancing.

It is much rarer, however, for Predator drones to make appearances above American cities. But one was spotting over Minneapolis this week, during the protests and civil unrest following the killing of George Floyd by Minneapolis police officers.

Predator drones, officially called the General Atomics MQ-1 Predator, are often used by the Air Force and CIA, and have been deployed in various U.S. wars, including Iraq and Afghanistan. They're mostly used for aerial reconnaissance but have also sometimes been equipped with missiles.

According to GovTech.com, one such drone was spotted in Minneapolis during the protests. It's known that the drone belongs to U.S. Customs and Border Protection (CBP), but it's not known who requested it. Journalist Jason Paladino, on Twitter, appears to be the first to notice the drone, on May 29; he also determined that the drone had taken off from Grand Forks Air Force Base in North Dakota.

A CPB spokesperson told multiple media outlets who asked about the drone that "earlier [on May 29] a US Customs and Border Protection, Air and Marine Operations unmanned aircraft system was preparing to provide live video to aid in situational awareness at the request of our federal law enforcement partners in Minneapolis… "The unmanned aircraft system provides live video feed to ground law enforcement, giving them situational awareness, maximizing public safety, while minimizing the threat to personnel and assets.”

It was later determined that the drone wasn't needed for that purpose, and it returned to North Dakota.

The drone was unarmed, Recode reported. Vice, in a separate report, said that CBP has "regularly" been flying such drones over American cities.

Now, several members of Congress have written a letter asking questions about the use of government assets in responding to the protests.

In a letter addressed to FBI Director Christopher Wray and acting Homeland Security Secretary Chad Wolf, the Democratic majority on the Committee on Homeland Security, led by Chairman Rep. Bennie G. Thompson of Mississippi, asked several questions about the administration's response to the George Floyd protests. These include statements that have been made about extremists' participation in the protests, and also about use of government assets.