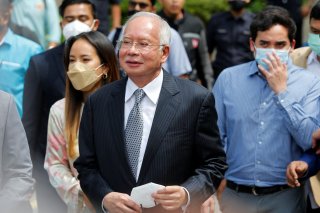 Former Malaysian prime minister Najib Razak, who governed the country from 2009 until his fall from power in 2018, was sent to prison on Tuesday after losing his final appeal against a corruption conviction related to the embezzlement of Malaysia’s 1Malaysia Development Berhad (1MDB) development fund—a scandal that has been described by the U.S. Department of Justice as the largest single case of kleptocracy in its history.

The former prime minister’s sentence was unanimously upheld on Tuesday by a panel of five judges of the Federal Court of Malaysia, the country’s highest court. The panel found that Najib’s appeal was “devoid of any merits” and ordered his earlier sentence to go into effect.

“This is a simple and straightforward case of abuse of power, criminal breach of trust, and money laundering,” Federal Court Chief Justice Maimun Tuan Mat said as she read out the court’s verdict. “We are unable to conclude that any of the findings of the High Court, as affirmed by the Court of Appeal, were perverse or plainly wrong…We agree that the defense is so inherently inconsistent and incredible that it does not raise a reasonable doubt on the prosecution case.”

Although Najib, aged sixty-nine, was initially sentenced to prison in 2020, he had remained free on bail pending a series of appeals until his transfer on Tuesday to Kajang Prison near Kuala Lumpur, Malaysia’s capital. In addition to a twelve-year prison sentence, the former prime minister must now pay a fine of 210 million Malaysian ringgits, or roughly $47 million.

After the verdict was read, Najib’s lawyer indicated that his legal team might seek a review of the court’s decision, although Maimun’s strongly-worded verdict appears to have narrowed the defense’s scope for further legal action.

In addition to his current prison sentence, Najib faces more than forty other counts of criminal activity related to his participation in the embezzlement from the 1MDB, a sovereign wealth fund created by his administration in 2009 in order to finance economic development in strategic sectors such as real estate and energy. In order to make these investments, the fund raised money by issuing bonds on behalf of the Malaysian government. However, instead of investing the money, the fund’s executives stole it, pocketing roughly $4.5 billion from 2009 to 2014 and spending most of it on luxury goods and real estate in the West. Najib is thought to have obtained as much as $700 million from the fund during its existence.

Once the scandal came to light, Najib actively sought to obstruct the government’s investigation, but after it was proven that he had been paid $10 million from a subsidiary of the fund, he was convicted of corruption and sentenced to prison. The fallout from the scandal also led Najib’s United Malays National Organization (UMNO) political party to lose power for the first time since the country’s independence in 1957, although it later returned to power at the head of a coalition government.