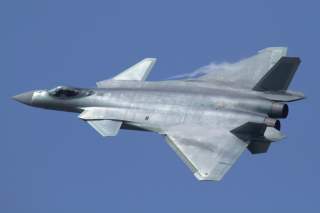 China's J-20 stealth fighter doesn't have a gun. That could be a problem for the Chinese air force.

Observers of the twin-engine stealth fighter long had speculated that the J-20 lacks a cannon. Photography of J-20s since the type's first flight in January 2011 hadn't revealed bulges or openings that might point to an internal gun. The J-20 hadn't appeared in public carrying an external gun pod.

The same story detailed the J-20's standard weapons loadout. The 67-feet-long warplane, the first squadron of which became operational in early 2018, features three weapons bays -- one each along each intake "cheek" and a third, larger bay along the centerline.

At the Zhuhai air show in November 2018, a pair of J-20s opened their weapons bays in full view of the crowd. Each fighter carried a one PL-10 short-range air-to-air missile in each side bay plus four long-range PL-15 missiles in the centerline bay.

The PL-10 is roughly equivalent to the U.S. Sidewinder missile. The PL-15 is similar to the American Advanced Medium-Range Air-to-Air Missile, or AMRAAM.

The J-20's bay layout is unsurprising. The U.S. Air Force's own F-22 stealth fighter also has three weapons bays in similar locations to those on the Chinese jet. The American plane's bays are bigger and together accommodate eight missiles.

The U.S.-made F-35 stealth fighter, by contrast, has a single, large centerline bay that, as of late 2018, could carry just two AMRAAMs. However, both the F-22 and F-35 also boast cannons as back-up to their missiles. The F-22 has an internal 20-millimeter gun. The F-35's 35-millimeter gun is internal on the type's conventional-takeoff A- and C-models. In the short-takeoff, vertical-landing F-35B, the gun is in a detachable pod.

The F-35's gun is not without controversy. Many early-model F-35s lack the software to use the gun at all. And the weapon is inaccurate, according to the office of the U.S. Defense Department's chief weapons-tester.

But at least the F-35 has a gun. Marine Corps F-35s carried their cannon pods on the type's first combat sortie in U.S. service, over Afghanistan in September 2018.

The U.S. military learned the hard way to arm its fighters with guns. As air-to-air missiles became common in the 1950s and '60s, American warplane-designers omitted guns from many fighter types, assuming all air-battles would be fought at long distances, rendering redundant shorter-range weapons.

During the Vietnam War, air crews flying early F-4s and other fighter types quickly came to regret that design choice. Close, chaotic dogfights in crowded airspace favored traditional gunnery. “That was the biggest mistake on the F-4,” John Chesire, who flew 197 combat missions during two tours in Vietnam, told Air & Space. “Bullets are cheap and tend to go where you aim them. I needed a gun, and I really wished I had one.”

The U.S. military added a gun to the ultimate E model of the F-4, as well as to all subsequent American fighter types. "The aerodynamic limitations inherent in employing missiles at minimum range makes the gun weapon system crucial for tomorrow’s combat arena," U.S. Air Force major Stuart Nichols explained in a 1998 paper for the Air Command and Staff College.

Today most of the world's fighters possess a gun. The J-20 is the exception. And the Chinese air force eventually might learn what the U.S. Air Force learned two generations ago over Vietnam. Giving up the gun is risky.