Project Habakkuk: The Plan to Use 'Iceberg' Aircraft Carriers Against Hitler 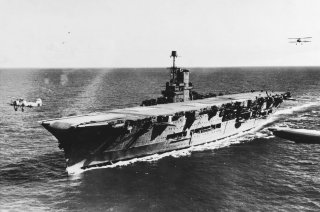 One man’s harebrained idea to land airplanes on icebergs was even picked up by Winston Churchill.

In the early months of the Second World War, German U-Boats were wreaking havoc against Allied shipping in the North Atlantic. Convoys from the United States especially suffered while German submarine captains rejoiced: so great were U-Boat successes that U-Boat crews fondly remembered the second half of 1940 as “Die Glückliche Zeit” or The Happy Time.

At that time, air cover could not be given to convoys for the duration of the Atlantic transit. U-Boat hunting groups, so-called wolf-packs, would lie in wait until air cover was forced to turn back from lack of fuel and then pick off ships like sitting ducks. Geoffrey Pyke, an English journalist and inventor had some ideas on how to protect oceangoing convoys.

Steel and aluminum were critical wartime resources and their use was restricted to war-related industries—the manufacture of tanks, airplanes, jeeps, and other related weapons of war. If a platform could be built somewhere in the Atlantic, escort planes could theoretically land there to refuel and accompany convoys all the way to England and to safety. But such a platform would, unfortunately, be very resource-intensive.

Since aluminum and steel were in short supply, Pike had to get creative with alternative building materials. He thought ice could be a useful alternative. Pyke’s idea was relayed to Winston Churchill. Ever an enthusiastic supporter of creative ideas, Winston was immediately taken with the plan, named Project Habakkuk.

Project Habakkuk envisioned a huge mass of ice with a flat top—like an aircraft carrier—floating in the Atlantic. The iceberg could be fitted with antiaircraft guns for protection from German bombers, and naval guns to provide protection from surface ships. The cold interior could be carved out to support sailors manning the iceberg. Still, an all-ice iceberg wasn’t necessarily a good idea.

Though ice is certainly plentiful, it has several characteristics that make it less-than-ideal as a naval building material. Ice is just slightly more buoyant than water, and cannot support much weight. Even if frozen, ice exhibits cold flow, that is to say, it shifts and moves in the same way that glaciers dynamically flow, albeit very slowly.

In order to keep the ice rigid and immobile, Pyke realized he would have to install a complicated refrigeration system onboard the iceberg to keep the temperature well below freezing. To add buoyancy and reduce cold flow, Pyke invented the aptly named Pykrete, a frozen mixture of wood pulp and water, which helped somewhat and had the added benefit of being much more resistant to bullets and other projectiles than ice.

Still, the idea had many insurmountable impracticalities.

Though several prototypes were created in Canada to test the idea, Project Habakkuk never came to fruition. One of the issues was that the amount of steel needed to build the internal crew support space, the flight deck, and the refrigeration system was greater than building an aircraft carrier!

Later in the war, escort and bomber planes were also able to fly farther out thanks to maturing drop tank technology—externally carried fuel tanks that extended a plane’s range. Portugal also decided to allow the Allies to use airfields on the Azores Islands, which gave them a better grip on the Mid-Atlantic. Project Habakkuk was doomed and probably for the better.