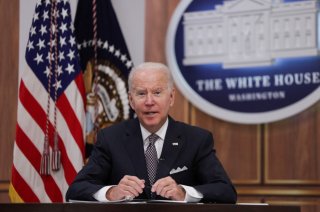 President Joe Biden announced on Tuesday that the United States would return to close adherence to the 1997 Ottawa Treaty, which prohibits “the use, stockpiling, production, and transfer of anti-personnel landmines”—effectively declaring a moratorium on landmine use for the duration of his tenure in the Oval Office.

Biden’s decision amounts to a restoration of the United States’ policy on landmine production that was reversed by the Trump administration. In early 2020, Trump removed U.S. regulations on landmine use issued by President Barack Obama in 2016, allowing the weapons to be manufactured and exported alongside other conventional weapons.

A statement released on the White House’s website outlined the policy changes, committing the United States to immediately cease the production, export, and use of landmines, and to immediately destroy any existing stockpiles in U.S. armories. It committed the United States to undertake “diligent efforts to pursue materiel and operational solutions to assist in becoming compliant with and ultimately acceding to the Ottawa Convention, while ensuring our ability to respond to contingencies and meet our alliance commitments.”

The statement noted, however, that landmine use would still be allowed along the Demilitarized Zone (DMZ) of the Korean Peninsula, the de facto land border between North and South Korea, and stated that the Pentagon would maintain any landmine reserves “required for the defense of [South] Korea.” This stipulation also existed in the Obama-era landmine regulations, although the U.S. has rarely used landmines along the DMZ and the exception to the rule is unlikely to affect the use of landmines in other conflicts.

Landmines have long been controversial in armed conflict because of their indiscriminate nature, resulting in higher civilian casualties than other methods of war. Worse, unexploded landmines typically remain active long after the armed conflicts they were intended to be used in have ended. Because countries recovering from wars are usually ill-prepared to launch costly and dangerous demining operations, the landmines often remain in place until accidentally triggered by civilians. The United Nations-backed Landmine Monitor claimed that more than 7,000 people across fifty-four countries had died from stepping on landmines in 2020, a greater annual death toll than some ongoing armed conflicts.

During his presidential campaign, Biden described Trump’s elimination of landmine restrictions as a “reckless” and “unnecessary” step and committed to restoring the previous guidelines when he entered office.

Because the United States has not banned the production and use of landmines altogether, it cannot be a party to the Ottawa Treaty, which 164 nations have signed. Every other member of the NATO military alliance has acceded to the treaty, although Russia and China have not.