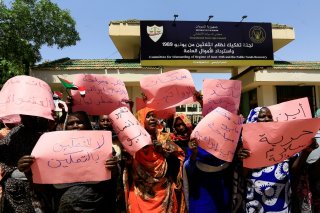 Civilian leaders in Sudan have initiated a series of demonstrations in Khartoum, Sudan’s capital, as the country’s transition to democracy has experienced increasing tensions.

Last week, an ongoing sit-in began in front of the presidential palace in Khartoum, arranged by a loose alliance of former rebels and civilian democratic activists. Most of these groups were formerly members of the Forces of Freedom and Change (FFC), an umbrella group that coordinated the protests against former Sudanese dictator Omar al-Bashir that led to his ousting in early 2019.

The subsequent power-sharing agreement between the FFC and the military, which overthrew al-Bashir in a military coup, provided for the creation of an eleven-member “Sovereignty Council” tasked with overseeing the country’s transition to democracy and first elections. However, smaller elements within the FFC complained that its power had been monopolized by four large political parties within it—the Sudanese Congress Party, the Umma Party, the Sudanese Ba’ath Party, and the Federal Gathering—and exited the alliance, forming a competing coalition, the National Accord Group (NAG).

The new faction began to organize protests, calling for the dismissal of the civilian-led government of Sudanese prime minister Abdalla Hamdok. It advocates for replacing them with technocratic leadership while maintaining the schedule for future elections. The remaining members of the FFC have also organized their own counter-protests in favor of the government.

The NAG has also accused the Hamdok government of mishandling the process of retrieving al-Bashir’s illicit assets, which were looted from Sudan’s treasury during his thirty-year rule.

Hamdok has described the present power struggle as the “most dangerous crisis” that Sudan’s transition had yet faced, warning that it could plunge the country into violent conflict if mishandled. The tensions between civilian groups are compounded by tensions between the civilians and the army, which has been accused of attempting to subvert the democratic transition and institute military rule—an accusation that Abdel Fattah al-Burhan, a Sudanese general who commands the army and leads the Sovereignty Council, has denied. However, al-Burhan has echoed calls for the Hamdok government’s dismissal, and according to the initial timetable for democratic transition, he was scheduled to transfer control over the Sovereignty Council to a civilian in May, a step that has not yet been taken.

Fortunately, while the disputes remain ongoing, all sides have praised the gains the country has made since the 2018-2019 Sudanese revolution that toppled al-Bashir, and reiterated their verbal commitments to nonviolence and peaceful protest.