Unrest in Sudan: Khartoum Protest Broken Up By Force 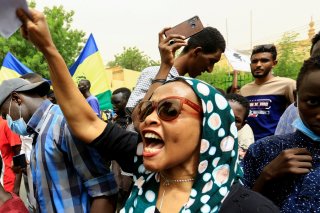 Sudanese security forces dispersed a protest by residents of Khartoum on Thursday, underscoring strains in the relationship between the civilian and military factions of the country’s post-revolution transitional government.

Sudan’s long-time dictator, Omar al-Bashir, was removed from power in April 2019 by the military, but only after massive civilian protests across the country had weakened his position. Consequently, both Sudan’s military and civilian leadership claimed a hand in the overthrow, and the transitional government has been composed of military officers and civilians in an uneasy alliance.

An attempted coup last week, led by military officers who remained loyal to al-Bashir, caused unrest among Sudan’s population, many of whom feared that high-ranking Sudanese military officers would try to thwart the nation’s planned democratic transition before its scheduled completion.

For this reason, the protest was hostile to the Sudanese military leadership, particularly to Abdel Fattah al-Burhan, leader of Sudan’s Sovereign Council, the collective head of state jointly established between military and civilian leaders after al-Bashir’s overthrow. Protesters chanted, “The army is Sudan’s army, not Burhan’s army,” and some interviewees told Reuters that they feared Burhan or other officers would try to seize power.

The Sudanese Professional Association, an umbrella group of Sudan’s trade unions, supported the protest, arguing that it was conducted “to protect Sudan’s democratic transition” and throwing its support behind “ending [...] partnership with the military council.”

Before it was broken up by police using tear gas, the protest was estimated to have 20,000 people in attendance, including many who had traveled from other parts of the country.

Sudanese Prime Minister Abdalla Hamdok, a long-time UN official supported by the civilian faction, addressed the issues of the protest, but urged caution and patience.

“The Sudanese people, and rightly so, have very high expectations about the revolution and about the changes, but this is a legacy of thirty years,” Hamdok noted at a UN meeting. “You cannot undo it overnight.”

Sudan’s democratic transition is scheduled to continue as late as 2024. Free elections have tentatively been scheduled for late 2022, although the transitional council has not set a date and hinted that they could be pushed back depending on conditions on the ground.

Crucially, members of the Sovereignty Council are forbidden from contesting the election, theoretically excluding military leaders like Dagalo and ensuring that the country is returned to civilian rule. Consequently, however, observers have pointed out that Sudan’s military leaders have an incentive to block or delay the transition to preserve their position.