Are a Deposed Dictator’s Loyalists to Blame for Coup Attempt in Sudan? 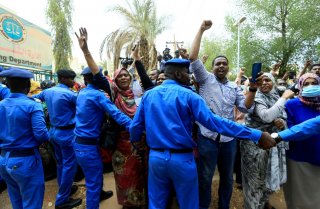 An attempt to overthrow the transitional government of Sudan on Tuesday has been thwarted, according to the country’s leadership. Twenty-one officers and an unspecified number of soldiers have been arrested.

The office of Prime Minister Abdalla Hamdok, Sudan’s civilian leader, described the plotters as “forces of darkness” and tied them to the regime of ousted President Omar al-Bashir, who ruled Sudan for thirty years—in spite of an International Criminal Court (ICC) warrant for his arrest—until his overthrow in 2019. In the aftermath of Bashir’s ouster, civilian protest leaders and military officers established a transitional government, with the objective of holding free and fair elections by 2024.

While Sudan’s democratic transition has been fraught with tension between civilian and military leaders—the latter of whom stand to lose considerable power if the transition is successful—it has continued to proceed on schedule, giving it the appearance of a rare success story in North Africa and the Middle East. The country’s eleven-member Sovereignty Council has brought together civilian and military leaders, including Hamdok, Sudanese general Abdel Fattah al-Burhan, and Mohammad Hamdan Dagalo, commander of the controversial “Rapid Support Forces” militia, which has been tied to war crimes in the country’s western Darfur region.

The coup attempt does not appear to have come close to succeeding. On Tuesday morning, fighting erupted in parts of Khartoum and Omdurman, causing the main bridge crossing the Nile to be briefly closed. Fighting was reported near a military base in Omdurman where tank units were stationed. After the attempt was defeated, the Sudanese military reported that the coup plotters had attempted to take over the building housing Sudan’s state media outlet, but had failed. As of Tuesday morning, traffic in the capital appears to have returned to normal, although armored vehicles continue to be stationed at key locations.

Hamdok stated that, in response to the coup attempt, the transitional government would “take immediate measures to fortify the transition and continue to dismantle the system of the former regime.” He also tied the attempt to unrest in the eastern city of Port Sudan, Sudan’s largest seaport, indicating that the plotters had attempted to foment unrest there.

Sudanese military spokesmen stated that they would continue to search for putschists, indicating that arrests will continue in the coming weeks.