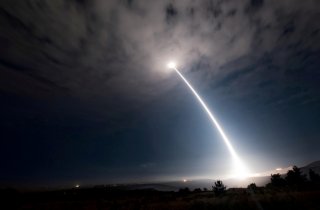 Prototype components of the Air Force’s new, high-tech, under development next-generation intercontinental ballistic missile (ICBM) already exist as the service prepares to “fire off” its first test launch of the new ground-based strategic deterrent (GBSD) in 2023.

“We are well into building our first components of the actual ICBM,” Greg Manuel, Northrop Grumman’s sector vice president and general manager, told the National Interest.

Low-rate initial production is slated to start by 2026 and the weapon is reportedly on track to deliver by the end of the decade. That couldn’t come soon enough, according to senior Air Force leaders. They’re concerned about an adversary potentially launching a “missile” between the arrival of the new GBSD and the obsolescence and retirement of the decades-old Minuteman III ICBM. Will the Air Force further accelerate GBSD in response to these concerns? That’s a realistic possibility given the impact of a digital engineering approach, which enables the service to assess and fast-track components of the weapon by replicating and testing them in a digital environment prior to construction.

Northrop developers have been clear to emphasize that any programmatic or timing decisions related to GBSD will be made by their client, the Air Force. But they have noted that progress with the new weapon has been rapid and successful due to what they describe as a collaborative relationship with the military service. Also, Northrop Grumman developers say that if the Air Force requests further accelerations of the GBSD, then they would likely be able to respond effectively.

This ability to accelerate may prove to be crucial given the level of concern about a possible “missile gap,” something which a Government Accountability Office report said may be beginning to take shape; the report said the Minuteman III may not be able to meet full mission requirements by 2026.

“A gap between Minuteman III and GBSD is not something we can have, especially since the ICBM is the cornerstone of our nuclear defense,” Lt. Gen. Richard Clark, the Air Force’s deputy chief of staff for strategic deterrence and nuclear integration, told The Mitchell Institute Nuclear Defense Forum earlier this year.

The level of concern continues to prompt a two-fold effort by the Defense Department to close the gap, including both successful development of the GBSD alongside a pursuit of aggressive upgrades to the Minuteman III. Clark told The Mitchell Institute that the Air Force is pursuing as many as twenty different modernization programs for the Minuteman III. Recognizing that the fifty-year-old weapon certainly has limitations and can only be upgraded to a certain extent, Clark explained that there is important ongoing work to improve the missile, its launchers and its boosters. As part of this effort, the Air Force has been continuing to fire off and test upgraded Minuteman IIIs to ensure its potential adversaries understand the United States has a functional nuclear deterrent during this transition to GBSD.

There has been a longstanding congressional demand for fast-paced modernization of the U.S. nuclear arsenal. This modernization leans on innovation and replacement programs. Its speed is somewhat inspired by the size and modern condition of Russia’s arsenal, among other things. As is often the case with major weapons programs, cost concerns figure prominently into developmental and programmatic decisions. Interestingly, Air Force officials say calculations have found that building a new GBSD for the long term saves as much as $38 billion dollars when compared to further extending the Minuteman III.

“One of the key things with GBSD is an ability to sustain and operate into the future,” Gen. Timothy Ray, the commander of Air Force Global Strike Command, told The Mitchell Institute for Aerospace Studies earlier this year. “Every way we look at this, the most cost-effective way was not to life-extend the Minuteman III. Life-extending Minuteman III was not a viable path. There is an extensive price tag for trying to modernize and sustain the Minuteman III because you will need to replace parts that weren’t meant to be in the ground that long.”

The development of the GBSD appears promising. Its pace may be accelerated and there is hope for some measure of “bridge” enhancements or sustainment of Minuteman III functionality.

“All of these programs are intended to extend Minuteman III before it falls off a cliff,” Clark said. “We are investing to keep the gap closed but that margin is fragile.”