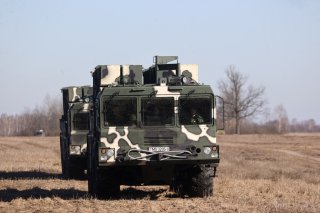 Upwards of some 30,000 Russian troops are taking part in joint drills in Belarus that are expected to conclude on February 20. The exercises are spread across five Belarussian training ranges and four airfields and involve a raft of advanced military hardware. According to Russian state media reports, the Kremlin sent a dozen Su-35 air superiority fighters, a Pantsir S1 medium-range surface-to-air missile (SAM) system, 9K720 Iskander short-range ballistic missile systems, and two units of the S-400 missile defense system in anticipation of the drills.

However, even more notable than the vast military hardware that has been deployed to Belarus is the news that Russian president Vladimir Putin said on Friday that he would participate in military cooperation measures together with his Belarusian counterpart, Alexander Lukashenko. The two leaders will attend the exercises in person.

"Of course, we will talk about the regional situation and assess how military cooperation is developing," Putin said during a meeting with Lukashenko in the Kremlin, TASS reported. "Now an active phase of military drills is in progress and tomorrow we will participate in one of serious measures in this series of military cooperation," Putin added.

The Situation on the Ground

"Putin will most likely be in the situation control center. Such drills and training launches, naturally, can't be held without the head of state. You know about the famous nuclear suitcase, the red button and so on," Peskov told reporters.

Lukashenko’s presence at the drills depends on their discussions with Putin, Peskov also explained. Yet, the Belarusian president had previously told reporters that he was planning to attend military drills together with Putin. Lukashenko had emphasized that "the Russian side will inform" about the place and the format of these maneuvers.

Russia's Defense Ministry also announced on Friday that the Russian Armed Forces would conduct scheduled strategic deterrence drills, during which ballistic and cruise missiles would be launched, on Saturday under Putin’s direction. The strategic deterrence force drills had been planned in advance and were intended "to inspect the preparedness of military command centers, launch combat teams, the crews of combat ships and strategic missile carriers for accomplishing assigned missions and the reliability of the strategic nuclear and conventional forces’ weapons."

Putin has continued to maintain that the ongoing Union Resolve 2022 drills are "purely defensive" and "not a threat to any other country"—by which he meant Ukraine. However, the buildup of more than 150,000 Russian troops along the Ukrainian border would suggest otherwise.

Western governments and NATO officials have voiced concern that a portion of the Russian troops currently deployed for Union Resolve 2022 could remain on Belarusian territory, contributing to a buildup of Russian forces along Ukraine’s borders. However, Moscow and Minsk have consistently rebuffed these claims, insisting on the full withdrawal of all Russian military personnel associated with the drills.