Belarus Is Drifting Back to Russia 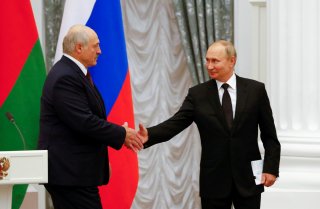 Belarusian president Aleksandr Lukashenko and Russian president Vladimir Putin met again last Thursday in Moscow for their sixth round of talks this year. As usual, the visit reignited debate over the potential for a sudden political takeover of Belarus by Russia.

But unlike the rapid seizure of Crimea and the Donbass, Russia’s approach to bringing Belarus firmly into its sphere of influence remains a protracted and slightly more subtle process. Despite their sometimes-fractious relationship, Russia aims to slowly increase Belarus’ dependency on it through steady integration, while ensuring its stability. This way, if reunification eventually occurs, it will change little except on paper.

Vladimir Putin is also using the imposition of European economic sanctions and Lukashenko’s isolation from the West following last year’s disputed elections to leverage Russia’s ability to determine the rules of engagement.

As a newly elected Belarusian President in 1995, Lukashenko was at first enthusiastic about integration with Russia. He organized a referendum giving the Russian language official status, as well as proposals for a collective security system, open borders, and a common trade zone with Russia.

Russia’s parliament ratified the creation of what is now known as the Union State a few days before Putin became President in 1999. Its ongoing intention is to facilitate even greater integration, including the introduction of a single citizenship, currency, and military.

No longer up against the feckless Yeltsin, Lukashenko in the 2000s preferred to play both the West and Russia off against each other while putting roadblocks to greater integration. After the Russian invasions of Georgia and Ukraine, Lukashenko’s rhetoric changed to cautiously emphasizing Belarus’ culture, language, and independence.

But despite Lukashenko’s objections, Russian efforts to integrate Belarus only increased as Minsk’s relationship with the West worsened.

Public disputes between Russia and Belarus over energy imports and political integration intensified, and at a press conference in late 2018, Lukashenko publicly complained to the Russian press about Putin’s attempts to force Belarus into an ever-closer union. He implored the Kremlin to “just say it out loud: destroy the country and become part of Russia.”

These fears were exacerbated by the Wagner scare in 2020, where a group of Russian mercenaries working for the Wagner private military company were arrested in Belarus. But a harsh crackdown on unprecedented protests against Lukashenko after the election a few days later resulted in EU sanctions that isolated the Belarusian president.

Further sanctions on Belarus following the arrest of an opposition figure in May this year cut off his access to the West even more, significantly limiting Lukashenko’s leverage with Moscow.

The Kremlin is well aware of Lukashenko’s reduced bargaining power. Its offer of $600 million to Belarus in loans and pledges of subsidized natural gas last Thursday is just business as usual.

But Russian economic support has kept the Belarusian economy alive, mostly by allowing Belarus to resell Russian gas and oil overseas through its pipeline network. After Belarus joined the Eurasian Economic Union (EAEU) in 2015, a common customs union was introduced as well as calls for a common energy market.

Belarusian exports are now also being rerouted through Russia due to European economic sanctions that have affected traditional export routes.

Moscow has also pressured Minsk into greater military cooperation. The Collective Security Treaty Organization (CSTO) military alliance is the second major Russian-led international organization to emerge under Putin, in 2002. It has helped push Belarus and Russia into developing a joint air defense system and border patrol, while the number of joint military drills has increased significantly in recent years.

And during the Russian troop buildup on the Ukrainian border earlier this year, Belarus moved military units to its border with Ukraine as a show of force. Belarus has also smuggled refugees into Europe through its borders with EU states in an attempt to destabilize them and is in talks to open a full-fledged Russian military base on its territory.

Lukashenko has also come to rely on Russian intelligence to remain in power. Russian intelligence services claimed last year that they had exposed a planned coup against him. In 2017, Belarusian authorities also allowed their Russian counterparts to kidnap a visiting Ukrainian national on Belarusian territory before bringing him to Russia.

Typically given less attention than the political, economic, and military sides to the Russian-Belarusian relationship are their cultural links. Alongside Ukrainians, Putin has repeatedly said that Russians and Belarusians are one people. There remains significant interconnectivity between Russian and Belarusian identities through similar languages, widespread adherence to Orthodox Christianity, eastern Slavic roots, and a shared history.

Lukashenko was slow to promote a strong national Belarusian identity after the Soviet collapse. But he attempted to promote new national language policies to reverse this, declaring in 2014 “if we lose our ability to speak Belarusian we will cease to be a nation.” However, Russian cultural and language centers, together with Russified schools, media, and political elites and the economic opportunities provided by speaking Russian, means the trend of Russification is likely to continue.

Obstacles to greater integration remain. Lukashenko has called for an end to trade restrictions and continues to demand equal access to Russian energy resources. But time and leverage are no longer on his side. The Kremlin appears to be banking on Lukashenko’s successor being unable to command the same control over Belarus and knows that the Belarusian political opposition is not anti-Russian, despite Lukashenko’s attempts to paint them as such.

While both Russia and Belarus may never be one country again, Moscow may not feel the need for this to become official so long as integration continues at its steady pace.