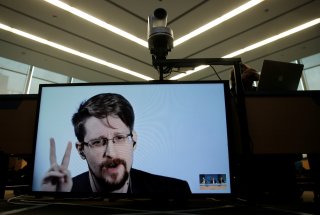 Snowden, thirty-nine, fled to Russia by way of Hong Kong in 2013 after leaking information revealing the scope of the NSA’s domestic and international surveillance operations. U.S prosecutors charged Snowden in absentia with theft of government property, “unauthorized communication of national defense information,” and “willful communication of classified communications intelligence information to an unauthorized person.” Snowden revealed the existence of an NSA surveillance program that gathered the phone records of millions of Americans. The program exposed by Snowden was later found to be unlawful by an appeals court, which also said that the U.S. intelligence officials who defended it were not telling the truth.

A declassified 2016 House Intelligence Committee report assessed that Snowden has repeatedly been “in contact with Russian intelligence services” since his arrival in Moscow. Snowden has consistently denied allegations that he has collaborated with the Russian government. “After years of separation from our parents, my wife and I have no desire to be separated from our son. That's why, in this era of pandemics and closed borders, we're applying for dual US-Russian citizenship,” Snowden wrote in 2020 about his decision to seek dual citizenship. Snowden reportedly has a son who was born in the Russian Federation and is a Russian citizen.

“I’m not aware of any change in his citizenship status. I am familiar with the fact that he has in some ways denounced his American citizenship. I don’t know that he’s renounced it,” said State Department Spokesperson Ned Price when asked if there are any changes to Snowden’s U.S. citizenship status. “Our position has not changed. Mr. Snowden should return to the United States, where he should face justice as any other American citizen would,” Price added.

Vladimir Putin said in a 2017 interview with U.S. film director Oliver Stone that Snowden is “not a traitor,” but that he should have resigned from his job rather than leaking government secrets. “He shouldn’t have done it. My view is that what he did was wrong,” Putin added.

Snowden was among the seventy-two foreigners granted citizenship by Putin’s decree. Snowden's lawyer, Anatoly Kucherena, told Russian media that the former NSA contractor will not be called up under Putin’s September 21 partial mobilization decree. “Since Edward did not serve in the Russian army, he is not subject to conscription,” he said.