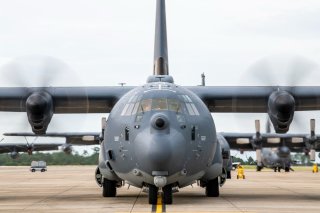 “This effort is meant to increase integration of both conventional and Special Operations Forces from participating nations and enhance interoperability with our NATO allies and European partners,” Operation ATREUS lead Lt. Col. Lawrence Melnicoff said in a statement covering the event.

“Routine engagements like those conducted throughout ATREUS training events enable effective responses for any contingency, as well as continuation of training, and increased readiness and collective defense.”

Rapid Dragon is an effort to arm cargo planes with long-range stand-off munitions. Although cargo planes typically fly without a weapons loadout, the United States hopes to take advantage of these aircraft’s internal space to quickly launch lots of munitions at targets.

In this most recent ATREUS iteration, “SOCEUR has expanded on previous concepts with the integration of Air Forces Special Operation Command (AFSOC) supported Rapid Dragon program, led and developed by the Air Force Strategic Development Planning and Experimentation (SDPE) Office,” the statement explained.

“The Rapid Dragon Experimentation Program is appropriately named, as it advanced rapidly from a concept on paper to a live fire using a developmental prototype in 24 months,” said Dr. Dean Evans, Rapid Dragon program manager.

Though this latest exercise took place in Europe, the initiative is particularly applicable to the Indo-Pacific region given that theater’s extreme ranges. Stand-off munitions launched from long-range cargo planes could increase engagement ranges and turn otherwise vulnerable cargo transports into substantial gunships.

“Now less than three years from the program’s inception, Rapid Dragon is being used by SOCEUR in the Arctic Circle. This is a testament to the team’s focus on rapid fielding to meet warfighter needs.”

Though not yet a reality, the concept is moving toward entering service.

“AFSOC’s greatest value to the joint force as well as allies and partners is when we find unconventional ways to deliver airpower. The future is going to be different than what we have experienced for the last 20 years, but one thing I’m certain of is AFSOC will be ready for whatever the future operation environment brings.”