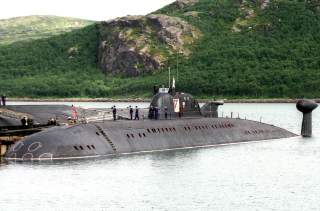 Key point: Moscow likes flexing its muscles to make a point. Russia wants everyone to know they are back and are a serious power.

The Russian navy in late 2019 surged a huge number of submarines into the Atlantic Ocean, prompting NATO to sortie patrol planes from Norway, Iceland and Scotland.

The result was one of the biggest concentrations in years of submarines and anti-submarine-warfare aircraft. And a stark reminder that NATO and Russian naval and air activity is returning to Cold War-levels of intensity.

The Russian navy in mid-October 2019 deployed submarines in the country’s biggest undersea exercise since the Cold War.

At the same time, an additional two boats -- the nuclear-powered Sierra-class attack submarines Pskov and Nizhny Novgorod -- sailed into roughly the same waters for tests and training.

The 10 vessels represent around 20 percent of the Russian submarine force.

The submarine activity, and anti-submarine patrols, appeared to concentrate on the eastern side of the so-called “GIUK Gap,” the stretches of open ocean between Greenland, Iceland and the United Kingdom.

The eight vessels in the Russian exercise were practicing protecting a “bastion” of open ocean in which Russian ballistic-missile submarines can hide. “The aim of the massive operation is to get as far out to the North Atlantic as possible without being discovered by NATO,” Barents Observer noted, citing Norwegian intelligence sources speaking to news outlet NRK.

The Russian exercise seemed to highlight Moscow’s new approach to undersea warfare. While the war game reportedly was defensive in nature, the same submarines could conduct offensive operations from the same waters.

During the Cold War, Soviet submarines needed to pass through the maritime chokepoint of the GIUK Gap in order to reach the open ocean and close within striking range of NATO ports and ships. That’s not the case with newer Russian subs with their longer-range weapons.

Many of the boats will carry the Russian navy’s new Kalibr land-attack cruise missile, which apparently can strike targets as far away as 1,500 miles. Kalibr “gives the Russian navy a long-range strike capability it has never before possessed,” Andrew Metrick, an analyst with the Center for Strategic and International Studies in Washington, D.C., explained in Proceedings, the professional journal of the U.S. Naval Institute.

“Russian submarines no longer have to transit the gap to have a dramatic impact on the European military balance,” Metrick explained. “Rather, they can operate from the relative safety of bastions in the Norwegian and Barents seas and strike targets across Northern and Central Europe.”