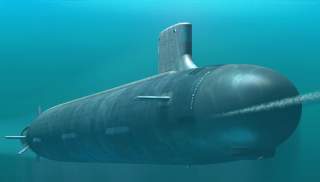 The U.S. Navy has too few submarines to deter Russia, China and North Korea, the commander of U.S. Indo-Pacific Command told a House of Representative subcommittee.

"The United States must maintain its advantage in undersea warfare—an asymmetric advantage that our adversaries are focused on eroding," U.S. Navy admiral Philip Davidson said in his March 27, 2019 testimony.

But America's submarine shortfall, which has been decades in the making, likely will get worse before it gets better. Even if the Navy could afford more subs, it lacks shipyards to build them.

"Potential adversary submarine activity has tripled from 2008 levels, which requires at least a corresponding increase on the part of the United States to maintain superiority," Davidson said.

In December 2016, the U.S. Navy announced it needed 66 attack submarines, or SSNs, in order to meet regional commanders' needs. But in early 2019 the fleet had just 51 attack boats. And that number is set to fall.

"Where we sit today is, we can’t build ships and deliver them in time to fill in that dip," said Vice Adm. Bill Merz, a deputy chief of naval operations.

Of those 42 boats, only a few likely would be available for operations. As recently as 2013, the Navy could deploy on short notice no more than eight attack submarines to the western Pacific, according to Adm. Cecil Haney, then the commander of Pacific Fleet submarines.

In early 2019 China possessed around 50 diesel-powered attack submarines and six nuclear-powered attack subs and was on track to add several more boats by 2020, the U.S. Defense Intelligence Agency reported in February 2019.

The 17 Yuan-class boats that were in service in 2019 are the most advanced conventional submarines in the Chinese navy and probably also the most reliable. In wartime they could pose the biggest challenge for U.S. forces.

Not only would China likely be able to deploy more submarines to the western Pacific than the United States could do, the Chinese boats also might be better-suited than the American vessels are to operations in the region's shallow, crowded littoral zones.

In order partially to compensate for its numerical disadvantage in submarines compared to the Chinese fleet, the U.S. Navy is experimenting with new, more efficient ways of supporting its subs, and also is buying robotic submarines that could reinforce manned boats on certain missions.

Davidson told lawmakers that his command also needs anti-submarine weapons. Indo-Pacific Command "must maintain its asymmetric advantage in undersea warfare capability, which includes not just attack submarines but also munitions and other anti-submarine warfare systems such as the P-8 Poseidon [patrol plane] and ship-borne anti-submarine systems."

The Navy in its 2020 shipbuilding plan claimed it was considering increasing submarine production beyond the two boats annually that have been in recent budgets. "Options are being explored regarding expanding production."

But even if the Navy could afford to spend more than $4 billion annually on attack submarines, it's possible that the United States simply doesn't have the shipyard capacity it would need annually to build three or more attack submarines.

The two U.S. shipyards that build submarines already are struggling as they try to sustain SSN production while also gearing up to produce 12 Columbia-class ballistic-missile submarines.

As a result of the escalating workload, recent Virginias have joined the fleet between four and seven months later than the Navy expected them to. The delays should sink any prospect of further boosting SSN production.

"It does not bode well if they are already seeing delays in the Virginia program with building two per year,"  Bryan Clark, an analyst with the Center for Strategic and Budgetary Assessments in Washington, D.C., told Defense News.