Recon Marines are Training for a Lethal New Mission 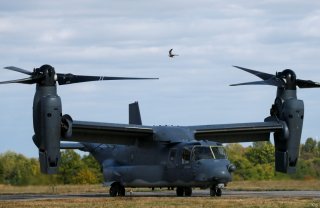 They represent the best and the deadliest the Marine Corps has, and they’ll work with the Air Force to send enemy ships to the bottom of the ocean.

On a cool summer night, a Marine Corps V-22 Osprey powers through the air. The tiltrotor is heading west from the Philippines, over the South China Sea, towards a small group of islands. 20 Reconnaissance Marines are seated within the V-22, accompanied by a pair of Air Force Combat Controllers, highly trained Airmen that often operate in conjunction with other special forces teams—and are FAA-certified air traffic controllers.

Once near the target island, the Marines and Airmen jump out of the rear of the V-22, pull their parachute cords, and drift down through the night sky. Upon landing, the Recon Marines neutralize the dug-in enemy and stand guard, while the Combat Controllers ensure that the island’s small runway is prepared to handle a large C-130 Hercules transport that followed the V-22 in and mark the strip with infrared strobes.

The Airmen make contact with the C-130 and guide it to the landing strip. The C-130 lands, and taxies to a stop. The turboprop's crew members jump out of the transport and carefully unload the cargo bay. This C-130 carries special cargo deep inside its belly: a High Mobility Artillery Rocket System launcher, or HIMARS. Rather than equipped with the usual pod of six unguided rockets, this HIMARS carries two Precision Strike Missiles, a surface-to-surface missile with a deadly 500-pound warhead and a range of nearly 500 miles.

Within minutes, the HIMARS has set up and is locked on to an enemy destroyer a couple of hundred miles out to sea. The wheeled artillery quickly fires first one Precision Strike Missile, then a few seconds later another, sending 1,000 pounds of warhead ordinance airborne.

Homing in on the destroyer’s radar, one missile slams into the ships’ conning tower, the other punching a hole amidship and exploding deep within the hull. Within minutes the enemy ship disappears from the ocean surface, leaving only bubbles and some floating detritus on the surface.

Within minutes, the HIMARS packs up and rolls back onto the C-130. The transport takes off into the night, minus two Precision Strike Missiles, but plus 20 Recon Marines and two Combat Controllers with their enemy none the wiser.

The Marines are Coming

It’s a mission that the Marine Corps has been practicing since at least 2019, in Japan, as well as in Australia, and is part of the USMC’s plan to put small groups of highly trained Marines equipped with long-range precision fires far out to sea in order to take out not only enemy destroyers and transports, but submarines as well.

Cross-training with other branches like the Air Force, as well as with other country’s military forces is the lynchpin of this strategy, by ensuring that these multi-branch operations are smoothly executed. Trust and familiarity between Marines and the troops they work with to complete these types of missions are of utmost importance.

These types of HIMARS Rapid Infiltration or HIRAIN missions allow high-value targets to be taken out quickly and quietly, giving commanders a greater degree of control in how to shape maritime battle spaces—an important asset as the Corp retools to better face a rising threat from China in the Pacific.