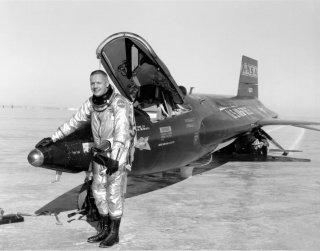 The world remembers Neil Armstrong as a towering figure in the United States space program and popular culture at large, mostly as the first man to walk on the moon. Armstrong has been the subject of Hollywood movies, documentaries, books, and numerous other looks at his life and career.

Armstrong was also the figure at the center of a particularly extraordinary test flight, seven years before he walked on the moon.

It was 1962 when Armstrong took a test flight in an X-15 in which, per the description, he “bounced off the atmosphere.”

“Armstrong carried out the longest flight of the X-15 program, a duration of twelve minutes and twenty-eight seconds. On this same flight, he achieved his highest altitude, 207,500 feet,” the description said. “On his return, Armstrong inadvertently pulled too high an angle of attack during pullout. The flight path took a bounce in the atmosphere, and he overshot the Edwards Air Force Base, heading south at Mach 3 and at 100,000 feet. He was able to turn hack while over the Rose Bowl in Pasadena. Almost out of kinetic and potential energy, he was just barely able to reach the south end of Rogers Dry Lake at Edwards.”

The story was also told in James Hansen’s biography of Armstrong, “First Man.”

“Well outside the atmosphere, he used the reaction control system to maneuver. Another job on this flight was to check out the MH-96, a G limiting device designed to keep the rocket plane from exceeding 5 Gs (gravitational force equivalent). He kept the nose up as he plummeted from his peak altitude, which caused his flight path to “balloon,” or rise again, producing about 4 Gs,” Hansen wrote.

“This ballooning continued as he waited to see the G limiter kick in, which it never did. It turned out that the real flight was not agreeing with simulations he’d done on the ground. All the while, he was cruising along at the rate of ten football fields a second toward Los Angeles, and still up around 140,000 feet. Soon he heard the main flight control center telling him as they watched his telemetry, ‘We show you ballooning, not turning. Hard left turn, Neil! Hard left turn!’ By then, Armstrong had, in his own words, gone “sailing merrily by the field,”" Hanson's account continues.

Armstrong would fly one more flight in the X-15 later that year before NASA tapped him for the astronaut corps.

Stephen Silver, a technology writer for the National Interest, is a journalist, essayist, and film critic, who is also a contributor to the Philadelphia Inquirer, Philly Voice, Philadelphia Weekly, the Jewish Telegraphic Agency, Living Life Fearless, Backstage Magazine, Broad Street Review and Splice Today. The co-founder of the Philadelphia Film Critics Circle, Stephen lives in suburban Philadelphia with his wife and two sons. Follow him on Twitter at @StephenSilver.