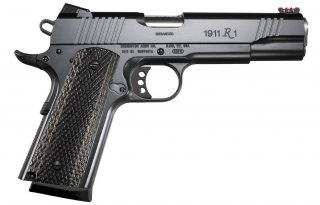 There are a couple things that might come as a surprise about the Remington Outdoor Company. First, it was only founded in 2012. It is actually now the parent company of such brands as Bushmaster, DPMS, Marlin, and most notably Remington—the latter being America's oldest gun maker and it also runs the oldest factory in the country that still makes its original product.

The other surprising fact is that Remington rifles are incorporated into the flag and even the national emblem of Guatemala. The rifles were included into the emblem as these were the type used during the 1871 Liberal Revolution, and represent the will to defend Guatemala's interests. While generic firearms can be found on the flag of Bolivia, the Remington is the only specific firearm apart from the AK-47 to appear on a flag—with the Soviet/Russian weapon appearing on the flags of East Timor, Zimbabwe, and Mozambique.

Remington remains America's oldest gun maker. The company was founded in 1816 by Eliphalet Remington II in Ilion, New York, and in the past 200 years it has grown to become the largest U.S. producer of shotguns and rifles, but also has the distinction of having developed or adopted more cartridges than any other gun maker or ammunition maker in the entire world.

It began when Eliphalet Remington II hand-built a musket, which he used in shooting competitions. The firearm performed so well he soon received orders and from there a firearms empire was forged.

The gun maker has been known for its quality sporting rifles over the past 200 years, and this includes its Remington 700, which has dominated the bolt action hunting market since its release in 1962. The company has released more than 900 variants and sold more than 5 million Model 700s—a version has also been used by the U.S. military with both the Army and Marine Corps using the rifle since the Vietnam War. The most recent updated version was adopted in 2019.

Remington has had a long history of producing other firearms for military use—and not just for the U.S. military. During World War I the company was contracted to produce M1907-15 Berthier rifles for the French Army, Pattern 1914 Enfield rifles for the British Army, and even Model 1891 Mosin-Nagant rifles for Imperial Russia. Due to the outbreak of the Russian Civil War, many of the Remington-made M91 Mosin-Nagants were never delivered but have been a sought after item amongst collectors for the past 100 years.

During the Second World War, Remington produced the M1903A3 Springfield bolt action rifle, which was rushed into production for the USMC in the early stages of the conflict.

Today the company is headquartered in Huntsville, Alabama, and has five other American locations. Under the Bushmaster, DPMS and Remington brands it is now one of the largest producers of AR-15 style semi-automatic rifles in the world.

However, the company hit a rough patch in recent years, and filed for Chapter 11 bankruptcy protection in 2018—it was able to exit the bankruptcy less than two months later after a pre-approved restructuring plan that was supported by near all of its creditors. However, it has again prepped for bankruptcy and as of June of this year was in "advanced talks" to sell its assets to Navajo Nation.