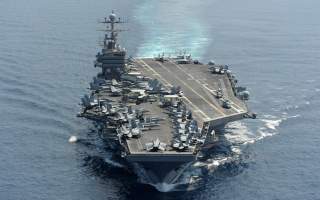 A few weeks after announcing it had moved some of its DF-26 ballistic anti-ship missiles to a safe haven in northwest China, the Chinese rocket forces has test-fired some of the missiles, according to state media.

The test proved the DF-26 can strike moving targets thousands of miles away, Chinese media claimed.

The 44,000-pound DF-26 in theory can target U.S. Navy warships including aircraft carriers as well as the major U.S. military installation on the island of Guam in the western Pacific Ocean.

Experts have questioned the missile's accuracy. Just in case, the U.S. military has fielded several types of missile-defense systems that might be able to intercept the DF-26. More capable defenses are in development.

The PLA moved an estimated dozen DF-26 launchers to central China reportedly in response to the appearance in early January 2019 of a U.S. Navy warship near the Paracel Islands, 650 miles from China's Hainan Island. The destroyer USS McCampbell sailed near the Paracels as part of a "freedom-of-navigation operation."

McCampbell can carry SM-6 missiles, which can travel as far as 130 miles and in theory could strike a DF-26 during its initial boost phase of flight and also during its final terminal phase.

The missile, which arms dozens of U.S. Navy cruisers and destroyers, completed three successful test interceptions in 2015, 2016 and 2017, according to the U.S. Missile Defense Agency.

In moving DF-26 launchers to Inner Mongolia, around 2,000 miles from the Paracels, China reportedly aims to protect the rockets from boost-phase interception. "A mobile missile launch from deep in the country's interior is more difficult to intercept," Global Times paraphrased a Beijing-based military expert as saying.

But even if the Americans can't shoot down the DF-26 during its launch, it's unclear that the rocket reliably can hit a moving ship at sea from 2,000 miles away. "The accuracy of the DF-26 is uncertain, with speculators estimating the [circular error probability] at intermediate range between 150 to 450 meters," or around 500 to 1,500 feet, the Washington, D.C. Center for Strategic and International Studies explained.

To steer it toward its target, the DF-26 has a built-in radar but also receives target data from external sources, another expert told Global Times. "An information network connected to the warhead, which possibly includes satellites, ground and naval radar in addition to radar on the missile itself, will constantly update the location of a moving target, informing flight control where to guide the missile," the Beijing-based expert said.

While there's reason to doubt the DF-26's accuracy, the Pentagon isn't taking chances. As of late 2018 the U.S. fleet included 38 Aegis-radar-equipped destroyers and cruisers that are compatible with missile-defense interceptors such as the SM-2, SM-3 and SM-6. The Navy wants to grow the missile-defense fleet to 41 vessels in 2019.

In addition to arming more ships with interceptors, the American fleet plans to improve ability of the SM-3 to strike ballistic missiles -- including the heaviest and fastest ICBMs -- during their highest, middle phase of flight.

The U.S. Missile Defense Agency announced it would test the SM-3 Block IIA against an ICBM-class target in 2020 as part of a $230-million development effort. If an SM-3 can hit a mid-course ICBM, it should be able hit a mid-course DF-26, too.

But there are reasons to be skeptical of America's mid-course missile-interception capability. SM-3s have missed their targets in nine of 42 tests since 2002. Not all of the tests were realistic or involved midcourse targets.

In May 2017 a U.S. Army Ground-Based Mid-course Defense rocket struck an ICBM-like target in a carefully-controlled test 60 miles over the Pacific Ocean. But that test might not have been as realistic as the Pentagon claimed it was.

Laura Grego, a missile expert with the Union of Concerned Scientists based in Massachusetts, examined the test plan and concluded that the target rocket probably would be significantly slower than a real ICBM would be.

The Army's mid-course defense system might not work in the real world. The Navy's SM-3 likewise could fail. American warships wouldn't be defenseless in that case, as they still could target incoming missiles in the seconds before they land.

That would be cutting it close. If the interceptors failed, the Americans would count on an incoming missile to defeat itself ... by falling wide of its target. Whatever its result, China's January 2019 DF-26 test aimed to minimize the chance of a miss.