Report: Poland Is Buying 32 F-35 Fighters (And Russia Won't Like It) 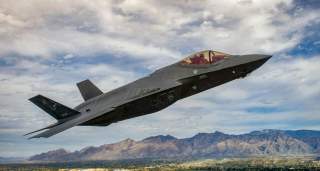 “It is reported that the Polish government made its decision: it requested the U.S. to buy two batches of F-35As, with deliveries from 2026,” according to the Dutch aviation magazine. “Deputy Minister of Defense Wojciech Skurkiewicz revealed these plans after a meeting.”

The eastern European country and NATO member skipped its usual competitive process in order to acquire the Lockheed Martin stealth fighter as early as 2024.

Polish officials “want to deepen their relationship with the United States of America in part by interoperability of advanced equipment,” U.S. Air Force secretary Heather Wilson said on May 13, 2019.

Mariusz Błaszczak, the head of the Polish defense ministry, in February 2019 signed the ministry’s Technical Modernization Plan outlining the country’s weapons priorities. “During the presentation of the plan Błaszczak suggested the procurement of 32 fifth-generation fighters is a priority,” Jacek Siminski wrote at The Aviationist.

Błaszczak and Polish president Andrzej Duda in April 2019 visited the Polish air force’s 1st Airlift Base in Warsaw, where Duda emphasized the need to replace the air force’s Soviet-made MiG-29s and Su-22s.

The Polish air force should operate the best aircraft in the world, Duda said during the visit. Błaszczak meanwhile called the the F-35 the “key to success.”

“The F-35’s design and electronic equipment make it difficult to track for advanced surface-to-air missiles — like the long-range S-300 SAMs that Russia deploys in its Kaliningrad exclave north of Poland,” Defense One reported.

When the U.S. Air Force deployed F-15 fighters from the 104th Fighter Wing to Estonia in 2016, the jets flew close to those Russian surface-to-air missiles.

“When you take off [in Estonia] you were either in or very close to being in a Russian [surface-to-air-missile] system out of Kaliningrad,” Col. Tom Bladen, operations officer with the 104th Fighter Wing, told Defense One in October 2016.

For decades Polish pilots have made the most of aging, unsophisticated aircraft. In mid-2001, U.S. Air Force F-15E pilot Guy Razer deployed to an air base outside of Warsaw where the Polish air force's 1st Wing flew MiG-29s.

"We were tasked with introducing Western tactics to them, while we were also responsible for deciding on their ability to operate with us in the near future in a large-force-employment type scenario," recalled Razer, who now is 61 and retired.

Razer recalled thinking that the Polish pilots were pretty skilled, given the limitations of Soviet equipment, doctrine and training.

Warsaw back in 2008 first expressed interest in the F-35. But at the time the single-engine stealth fighter was too expensive for Poland. The plane’s price has fallen as the production rate has increased. The F-35’s unit price by 2019 had fallen to around $80 million. Belgium is buying 34 F-35s for $4 billion. Fighter acquisitions usually include spares, weapons and training services in addition to the planes themselves.

If Warsaw in mid-2019 signed a contract for F-35s, it could start receiving the fighters in 2024, Lockheed officials reportedly told Polish officials.

But buying F-35s fast means bypassing the usual competition. Observers expected Boeing with its F/A-18E/F and F-15, Saab with its Gripen and Eurofighter with the Typhoon plus Lockheed with the F-35 and F-16 all to compete for the Polish tender. “Now it seems that the tender has been already resolved and that the F-35 is going to become the next Polish fighter aircraft,” Siminski wrote.