Republicans Have a Plan to Win Back the House: Fight Like Trump 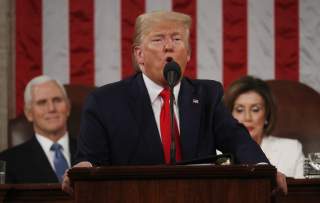 With the primary season in full swing, the media’s attention is focused on the presidential campaign. Lost amid this coverage is a key change in how Republicans are campaigning for Congress.

In contrast to the 2018 midterm elections in which many GOP candidates in competitive districts ran away from Donald Trump, a new cohort of Republicans is embracing the president to win back House seats or shift the Senate to a more activist posture.

For example, Matt Mowers, 30, is running for the U.S. House in New Hampshire’s 1st district, a swing seat that runs from Manchester to Portsmouth. No incumbent member of Congress has been re-elected since 2008 but it’s been in Democrat hands since Trump won, even though Trump beat Hillary Clinton by a single point in the district.

Bucking conventional wisdom from political consultants, Mowers has embraced Trump, for whom he worked on the 2016 campaign and subsequently in his administration. Mowers also vows to “fight radical socialism,” reflecting Trump’s pugnacious and unapologetic style of taking on opponents.

In northeast Pennsylvania, Jim Bognet, 44, is also running to unseat a Democrat in a competitive district. Like Mowers, Bognet worked in the Trump administration and makes no effort to soft-pedal his intentions of working with the president. A key point of Bognet’s campaign is lambasting incumbent Democrat Matt Cartwright for his support for the Democrat effort to impeach Trump. Bognet’s first radio ad boasts without nuance: “We must stop the assault from Nancy Pelosi and her lap dog Matt Cartwright against our great President Donald Trump.”

In Tennessee, Bill Hagerty, 60, is running for the Senate seat being vacated by retiring Republican Lamar Alexander. Hagerty held a senior position on Trump’s presidential transition and helped U.S. Trade Representative Bob Lighthizer negotiate the new farmer-friendly trade deal with Japan after Trump-appointed Hagerty ambassador. Trump actually beat Hagerty in announcing his own campaign, which the president did without warning via Twitter.

While Tennessee consistently votes Republican in presidential and Senate races, Hagerty represents a change from more passive figures like Alexander and Bob Corker, who left the Senate last year and was often critical of Trump. Hagerty has made clear he will be an activist senator, joining the state’s other senator, Marsha Blackburn, in actively promoting the Trump agenda.

What’s at stake in congressional races like these is the degree to which a likely Trump second term will make lasting change to America. While Trump has accomplished an impressive amount mostly without Congress in his first term, he’ll need actual legislation to lock in many changes.

In the usual trajectory of an administration, a new president begins with a honeymoon in which Congress enacts the chief executive’s top priority. Barack Obama got a huge spending bill, and later Obamacare. George W. Bush got tax cuts. Bill Clinton got tax hikes and a huge spending increase.

Trump never got a honeymoon. His fellow Republicans controlled both houses of Congress for the first two years of his administration, but refused to advance priorities like the funding the border wall or putting pressure on sanctuary cities. Congress also ignored many major reforms Trump proposed at various federal agencies.

As a result, Trump has made the most of what he can accomplish without Congress. Presidents usually turn to international issues in their second terms when their domestic power wanes. Trump has focused on foreign affairs earlier, especially trade. Thanks to ample power granted to a president by the Constitution and law, Trump has been able to reform trade radically with limited congressional involvement.

Trump also used his executive power to reverse the onslaught of job-killing federal regulations that built up over the previous four presidencies, ending the lost decade of economic stagnation that marked the Obama years.

Today’s economic renaissance was also triggered by the 2017 tax cuts, one of few major pieces of legislation on which Congress and Trump agreed. Passed mostly on party lines when Republicans still controlled both houses of Congress, the bill made major cuts to corporate and individual tax rates. The resulting shift of capital from the unproductive government sector to the productive private sector has had a salutary effect obvious to everyone except the progressive elite.

But the individual tax cuts, which also account for taxes on many small business, begin to expire in five years. Business managers would begin cutting investment before that time, and the economy would slow as it does whenever taxes are hiked. Trump will need Congress to act to extend them or make them permanent. He would also need congressional approval for additional tax cuts his administration is likely to propose, as well as other major domestic initiatives.

Put simply, Trump needs a more cooperative Congress with energetic Republican supporters if he is to cement his legacy and extend the current economic boom. Given that midterm elections in the sixth year of a presidency like those coming in 2022 are always difficult for the party that holds the White House, it is probably now or never.

The new cohort of unapologetic Trump-supporting candidates is a good sign for him, and another indication that Trump is creating a new right that reflects his confidence and style.