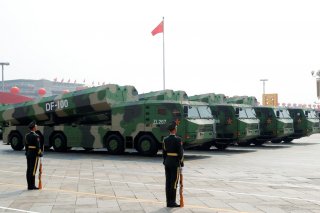 After decades of testing bulky prototypes, practical laser weapons are entering more widely into service in the 2020s, coming in forms ranging from small arms designed to blind or incapacitate individuals to weapons mounted on trucks and armored vehicles, warships, and aircraft intended to burn incoming missiles and drones out of the sky.

But the increasing practicality of modern lasers may unlock another long theorized but largely unrealized application: faster and more efficient high-speed propulsion.

An article by Stephen Chen in the South China Morning Post reports that researchers at the Beijing Space Engineering University, which falls under the umbrella of China’s military Strategic Support Force, have modeled a laser capable of speeding up supersonic and hypersonic aircraft and missiles. In a paper published in the journal Laser and Infrared, researcher Wang Diankai and his colleagues studied using a laser mounted on a hypersonic vehicle—ie. an aircraft that can attain speeds of five times the speed of sound or faster—to change shockwave structure and pressure distribution, calculating that the device could reduce aerodynamic drag by 70%.

The concept is to use a nano-pulsed laser to break down air particles in front of a missile into a teardrop-shaped ball of plasma gas, or plasma hot core. The core vaporizes into two separate balls which project spike-like shockwaves outwards in front of the vehicle, deflecting or reshaping pressure from incoming aerodynamic shockwaves.

In an earlier research paper (link here), Wangkai notes “plasma core can maintain a steady state of high temperature and low density for a long time, and provides sufficient reaction time for the relevant research on plasma active flow control.”

Similar laser-induced airflow control methods have been studied up to the point of wind tunnel testing in the United States and further afield, though Wang claims the current research takes more real-world variables into account and is thus closer to practical application than prior studies.

Don’t be such a drag

Drag, or air resistance, results from the friction generated by a moving body pushing through air molecules, and increases exponentially the faster that body travels, reducing maximum speed and increasing fuel consumption. Particularly when approaching or exceeding the speed of sound, shockwaves form that sharply increase drag and render aircraft more difficult to control.

Aeronautical engineers have devised a slew of techniques over the last century to minimize drag, such as swept wings that delay shockwave formation for transonic or supersonic jets and the use of the “area rule” design concept. However, beginning the 1980s engineers in the United States and later Australia and Brazil began exploring using lasers or microwaves to deflect and reshape drag-inducing air molecules ahead of an aircraft.

Notably, aeronautical engineer Leik Myrabo proposed using a ground-based (or later, satellite-based) laser or microwave to explode the air underneath a “lightcraft,” propelling it forwards. Though Myrabo’s concept involved propulsion, not just drag-reduction, a 1995 article in Popular Mechanics also suggests projecting a microwave beam from a satellite to reduce drag by forming a directed-energy air spike (DEAS) to redirect shockwaves.

A 2005 wind tunnel test involving a 35 KW laser conducted by Myrabo and a team of Brazilian engineers found a reduction in drag, as did a 2010 test of “laser-ablation propulsion” which calculated a 40 percent reduction in drag.

It’s worth cautioning, though, that wind tunnel testing involved test bodies that weren’t necessarily designed for aerodynamic efficiency, so the benefits might be reduced for more realistic drag-optimized airframes.

Nonetheless, Wang’s research builds on earlier findings that lasers could in theory reduce drag and thus speed up aircraft. But it also implies some progress on the practical half of the equation remaining to be solved: devising a laser and power source light enough that its weight doesn’t decrease the speed of a missile or aircraft it’s mounted on more than the drag reduction increases it.

For that reason, earlier concepts and tests had the laser or microwave deployed separately from the aircraft, severely limiting potential practical applications. Modern lasers and power sources remain large and heavy, though much less so than the bulky devices developed during the Cold War thanks to the advent of solid-state laser technology and other innovations.

Certainly, there’s also a precedent that radical drag-reduction techniques can have military application. Consider Russia’s Shkval super-cavitating torpedo (and the Hoot torpedo, its Iranian offshoot) which generates a gas bubble around itself to minimize water-induced drag, allowing it to attain speeds four times that of conventional torpedoes. Of course, Shkval is surging through a liquid medium, while Wang’s research aims to blast the gasses in the Earth’s atmosphere.

If a laser and its power source can be miniaturized sufficiently to be mounted weight-efficiently onboard an aircraft or missile and sustainably generate a powerful plasma core effect, then it could indeed allow existing aircraft and missiles to attain greater maximum speeds and travel out to greater ranges with the same amount of fuel.

And to be sure, those drag reduction techniques would especially enhance the hypersonic weapons being deployed by China, Russia, and eventually the United States, allowing them to double down further on strengths in speed, range, and maneuverability while reducing the effectiveness of existing air defense missiles—though those conceivably might be improved using the same laser-based drag-reduction techniques!

It would also have implications for commercial air travel, hypothetically making more viable the reintroduction of supersonic airliners.

But a lot hangs on that initial if regarding miniaturizing the power source adequately, which will require more time and money to work out. Furthermore, the resulting technology would still need to be cost- and weight-efficient enough to be a superior solution compared to simply building a bigger engine or increasing fuel supply.

Still, China and the United States have devoted billions of dollars developing both directed energy and hypersonic weapons and aircraft in the last decades, so it’s entirely plausible that scientists will find a way to harness improvements to the former, particularly in terms of miniaturization, to enhance the speed and efficiency of the latter. However, that will require the technology to make the leap from its apparently promising theoretical foundations and wind tunnel tests, into the form of actual flying prototypes.