The Results From America's First F-35 vs. F-16 Dogfight May Surprise You 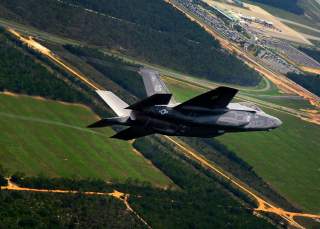 The exercise over Hill Air Force Base underscored the growing role of the F-35 in USAF training and operations. Despite the new fighter’s low readiness and the continuing debate over just how many of the radar-evading planes the Pentagon should buy and how fast, the F-35 is becoming more important by the day to the world’s biggest air force.

Some of Hill’s F-35s are on deployment in the Middle East, where on April 30, 2019, they dropped guided bombs on Islamic State forces in Iraq, marking the Air Force’s combat debut with the new stealth fighter.

In all, around 40 F-16s, F-35s and adversary planes few mock combat over Utah, practicing attacking a defending Hill’s runways and facilities. Draken didn’t specify which of its fighter types it dedicated to the war game. The company operates old A-4s and Mirage F.1s, among other types.

The exercise gave new F-16 pilots with the 311th Fighter Squadron a chance to tangle with pilots flying America’s newest fighter. “For the first week, the pilots flew basic fighter maneuvers – one versus one engagements commonly called ‘dogfighting,’” the Air Force stated. “They also flew advanced combat maneuvers, two aircraft versus four or more enemy aircraft. The students fly in a two-seat F-16, with an instructor in the back.”

During the second week of the exercise, new pilots flew “large-force” missions pitting many F-16s against other F-16s and F-35s. “Pilots took off in waves to simulate a large-force engagement with enemy aircraft,” the Defense Department stated.

“The dogfighting training missions start out scripted, with set passes and distances, and then the students are challenged to improvise against more experienced pilots in a very capable jet,” according to the Air Force.

“These guys are getting really good at flying the F-35 and they can present some aggressive situations that force young pilots into errors,” said Maj. Benjamin Walters, 311th Fighter Squadron instructor pilot. “It’s not always the guy who should win that does win. At some point it's pilots in cockpits that win fights.”

The F-35 can be sluggish compared to the F-16. Its pilots primarily train to fight long-range air battles using beyond-visual-range missiles. “That’s the assumption, and we are very good at that,” said Maj. Jondavid Hertzel, a Hill-based weapons officer. “But in the fog and friction of war and chaos, fighting within visual range will probably always happen. And that’s why we train to it. Prepare for the unexpected in wartime.”

While the fighters clashed, maintainers on the ground “were tasked to continually provide ready aircraft,” the Pentagon stated.

“Maintainers worked in ‘cells’ of crew chiefs, weapons technicians and avionics technicians, overseen by a senior non-commissioned officer, that kept up to four aircraft ready for flight at all times,” Air Force Times reported. “The maintainers generated 44 sorties each day.”

“Normally our maintainers have two to three hours to turn an aircraft, so having to do so every 30 minutes really tests their skill,” said Capt. John Goodwin, a maintenance operations officer with the 419th Fighter Wing. “These exercises are an extremely effective and essential way to ensure our overall readiness.”

David Axe serves as Defense Editor of the National Interest. He is the author of the graphic novels  War Fix, War Is Boring and Machete Squad. This article appeared earlier in 2019.