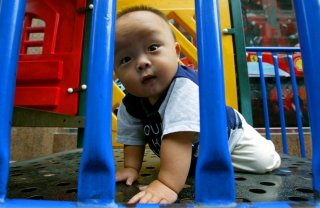 Abortion rights have for decades remained a flashpoint in the United States’ ever-widening socio-political divisions—divisions likely to increase as the Supreme Court’s conservative majority seems intent on permitting states to substantively ignore the precedent set by Roe vs. Wade guaranteeing women the right to terminate an unwanted pregnancy.

But the issue of reproductive freedom is rearing its head again in China too, even as its government progressively reverses the One-Child policy which resulted in many women being forced to abort their pregnancies.

A sentence in a policy document issued by the State Council detailing a ten-year plan intended to improve women’s rights has aroused controversy inside China and beyond due to a suggestion the government should “reduce non-medical abortions.”

Obviously, that wording could refer to both coercive and non-coercive policies, and in fact, a prior 2011 plan also mentioned a goal to  “reduce the rate of abortion,” which averaged nearly ten million per year from 2014-2018.

However, commentators in China and beyond have expressed concern that the statement is a herald of a new government campaign pressuring women to have more children whether they want them or not.

Mao Zedong, famously a proponent of the rural lifestyle in rhetoric if less so in his personal life, promoted large families and population growth as means of enhancing China’s economic and military power.

As part of the pro-natalist agenda, birth control was condemned and abortion was made illegal in the 1950s except in circumstances related to the health of the mother. As in the United States, the ban led to deaths from women seeking illegal abortions, and exceptions to the laws were gradually enlarged over the next twenty years.

By the early 1970s, Chinese demographers realized the doubling of the population from 500 million to a number approaching one billion posed a huge problem for China’s economy. Thus, following a period urging two-child families, Mao’s successor Deng Xiaoping debuted the more rigid One Child Policy in the early 1980s.

This was implemented through a variety of mechanisms. Transgressors for example were punished with annual financial penalties, social shaming, and possible denial of jobs and education, and their proscribed children were sometimes denied social services.

But much of the policy was preventative, with women coerced or forced by officials and doctors to abort second pregnancies. In the early years, many women were also forcibly sterilized without their consent or received mandatory intrauterine devices (IUDs) after giving birth.

The conversion to the so-called 4-2-1 family structure (four grandparents, two parents, and one child) was enormously difficult for Chinese families, which tend to remain more tightly integrated across generations than Western nuclear families. Sons are expected to hold greater responsibility in caring for elderly parents, and thus single-child families with a daughter were considered to lack a benefactor to care for parents later in life and carry on the family name.

This in turn caused many prospective mothers to abort female pregnancies identified by ultrasound. The Chinese Communist Party (CCP) eventually banned such sex-selective abortions, but they leave a legacy of skewed male/female birth ratio to his day. Many families also resorted to deceptive measures, attributing parentage and places of birth in official paperwork to reallocate prohibited children to childless relatives.

Nonetheless, the One-Child Policy was unevenly implemented. Residents of especially impoverished provinces and ethnic minorities were granted larger quotas of children as part of Beijing’s policy of granting such regions perks to minimize resistance to CCP rule, and numerous other exemptions were created too. One common rule was that if both parents in marriage were only children in their families, they in turn were allowed to have a second child.

Ultimately, China’s population growth did decrease, and the CCP began relaxing the policy. Finally, in 2015, the One-Child Policy was replaced by the Two-Child policy—and then in 2021 the Three Child Policy.

Why did the rules change so fast? CCP demographers realized that the decline in birthrate was so pronounced that there would be too few young laborers entering the workforce to replace their retiring parents—and that the aging of the population now posed a serious threat to China’s economy.

But retiring the One-Child Policy failed to kick population growth back up. Statisticians found that the birth rate continuously declined from 2017 to 2021—for example dropping from 14.6 million in 2019 to 12 million in 2020, resulting in a non-replacement birthrate of 1.3.

This phenomenon was undoubtedly a product of China’s changing material conditions. In an agrarian society, large, geographically proximate families have greater economic potential and provide a social safety net for the elderly. But in the twenty-first century, a large share of China’s population has transitioned to life in urban areas, or have young parents, who migrate to work in cities while their children remain in rural areas under the care of grandparents.

In this new context, the costs of raising children are greater, and women employed in a modern workforce have less time for child-rearing as they pursue careers and education away from home. Furthermore, family structure—though still generally tighter than in many Western countries—is frayed and more likely to be geographically separated.

Under these circumstances, many (but by no means all) young Chinese now prefer to have fewer children even as the CCP’s policies seek to promote the opposite.

That said, even as Beijing is permitting most Chinese to have larger families, some minorities, notably Muslim Uyghurs are now reportedly being targeted by more restrictive policies as the government seeks to shrink their share of the population vis-à-vis the Han majority. This has reportedly been implemented via forced sterilization, IUD insertion, and abortions. Police raids have been employed to detect forbidden children, and women sent to camps for giving birth to too many, resulting in a sixty percent drop in the Uyghur birthrate from 2015-2018.

The CCP’s past policies, therefore, inform the concern aroused by the short phrase in the new ten-year plan.

To be fair, read literally the sentence could in theory just amount to defensible incentive-based policies, such as seeking to promote the use of contraception over reliance on abortions—due to young people lacking familiarity with contraceptive options—or providing benefits and family leave policies to mothers. And such policies are indeed spelled out elsewhere in the plan.

However, many fear more coercive measures because the CCP is not known for its light touch when it comes to handling social policies. This is the same government that banned the portrayal of effeminate men on television this summer because officials were concerned by the ostensibly emasculating popularity of South Korean pop stars.

In fact, due to the way the abortion-reduction policy is situated in a national planning document, it may end up being interpreted and implemented in various ways by local and provincial officials.  That could result in a situation like in the United States where access to abortion is subject to varying degrees of restriction by state governments, though admittedly without the same context of U.S. partisan politics.

Indeed, Washington is hardly in a position to cast stones as its own legal regime protecting reproductive rights appears to be crumbling, and there is increased historical scrutiny towards the United States’ own dark history of coerced or forced sterilization of African, Native, and Hispanic Americans.

The vaguely-worded policy prescription has clearly aroused concern amongst women’s rights advocates that women in the planet’s most populous country may soon have to contend with new risks of state intervention while making their most personal of life choices.