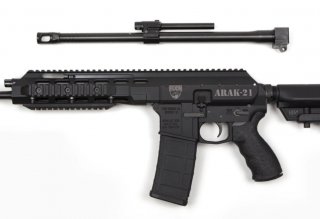 The AR-15 and the AK-47 are the two most iconic rifles of the last fifty years. Both represent two systems of thought with gun design philosophy. The ARAK-21 XRS seeks to combine the benefits of both weapon systems into one gun. The original ARAK was an upper receiver, bolt system, and barrel that allowed a shooter to fire the AK-47’s iconic 7.62x39 millimeter ammunition with any standard AR-15 lower receiver. Faxon has released a lower to go with its nifty upper. Let’s break down the specifics of this complete weapon system.

The ARAK-21 XRS demonstrates remarkable accuracy. When firing 5.56 ammunition, the ARAK-21 shoots better than the average AR-15. Depending on the ammunition, the ARAK shot around one-inch groups at 100 yards. The ARAK-21 performed well with 7.62 x 39 millimeter, though not as impressively as with the 5.56-millimeter ammunition. Using 7.62 ammunition, I hit five-shot groups at 100 yards with 1.68-inch groups with commercial ammunition and 2.73-inches with military surplus ammunition. The ARAK-21 can also shoot .300 AAC Blackout rounds, and hit a 1.5-inch 5 shot group at 100 yards. And if you want to increase the accuracy further, I’d recommend attaching an LPVO optic. The ARAK definitely takes and improves on the accuracy of the AR-15.

During my testing with the XRS complete rifle, I encountered no jams or weapon malfunctions with any ammunition or magazines. Some other reviewers encountered jams when switching ammunition types. These issues were resolved by using the adjustable gas block. You’ll want to see which gas configuration works best with each type of ammunition. The ARAK-21 is sturdily constructed, with a 6061-T6 aluminum upper receiver and a bolt made out of hardened 4140 steel. After a few months of testing with several hundred rounds put through it, I observed lots of carbon build-up in the bore. Fortunately, I could clean the carbon. The ARAK-21’s demonstrated solid reliability.

The ARAK-21 boasts a wide variety of features that offer lots of options for customization. The ARAK-21 comes with a quad rail forend, allowing attachments on all sides. The side and bottom rails are easily removable, and I found the naked forend more comfortable to grip. A Picatinny rail runs the full length of the top of the gun. Because the recoil system is different from a traditional AR-15, you can use almost any stock you want with this gun. The ARAK-21 comes with a dual ejector, allowing you to eject your spent shell casings to the left or right. This feature is a godsend for lefty shooters who often have to contend with casings being ejected to the right. The ARAK’s safety is also ambidextrous. The ARAK also comes with an adjustable gas block with four positions. Each position is good for different kinds of ammunition. If you’re used to an AR-15, you may find that the sight sits a little higher on the gun than you’re used to. This means you’ll have to rest your cheek on the buttstock a little differently from what you’re used to. The many features of the ARAK-21 make it great to handle for every kind of shooter.

The trigger is a mil-spec trigger. It’s not match-grade, but not terrible either. Faxon recommends HiperFire triggers for an improved trigger pull that will still reliably ignite military surplus 7.62 ammunition. Getting super light triggers designed for an AR-15 can cause problems with cheaper 7.62 ammunition.

The ARAK-21 can be converted to fire 5.56 x 223 Rem., .300 AAC Blackout, and 7.62 x 39 millimeter. You’re not going to find a weapon able to shoot bullets more suited to self-defense and combat scenarios than this one. The gun can be switched in three minutes from 7.62 millimeters to 5.56 or .300 Blackout. It takes less than two to switch from .300 Blackout to 5.56 or vice versa. It also accepts a wide variety of magazines, including Generation 1 and 3 Magpul PMAG’s, Thermold 20 round magazine, Troy Battlemags, and US GI magazines. While some prefer the mobility of pistols for home defense, many prefer the larger ammunition capacity and drop-your-target rounds of a rifle. If you want to specialize in the ammunition you shoot, this is the gun for you.

The gun comes with both 16- and 20-inch barrels and weighs in at a light 5.5 pounds. The gun was light and easy to hold, even one-handed.

The muzzle brake did a great job at reducing recoil and barrel rise when shooting. The recoil was much less than a typical AK, and felt more like a .22 LR when shooting 5.56.

The gun comes at $1,899. This is not a cheap gun, but it allows you to shoot rounds that normally require you to own separate weapons. Combine that with the wide variety of features (adjustable gas block, ambidextrous ejector and safety, rails, accuracy), and this is a great value for a gun.

ARAK-21 XRS Complete Rifle Review: Is It Worth It?

The idea of the ARAK-21 XRS sounds gimmicky. Combining two very different gun design philosophies into a single system seems like a surefire way of making a bad gun. Nevertheless, the result is impressive. The ARAK is modular, ambidextrous, accurate, and boasts an adjustable gas block. It shoots automatic, suppressed, un-suppressed, supersonic, and subsonic ammunition. If you want to change barrels quickly and shoot lots of ammunition types, this is a great weapon system. Here are some of the features that made this such a special gun:

If you’re looking for the ultimate combination of power, accuracy, and fun, check out the ARAK-21 XRS Complete Rifle.