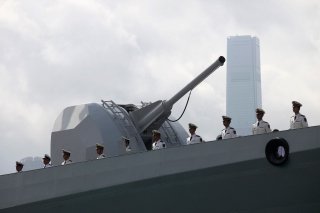 “Ten nations, 22 surface ships, one submarine, multiple aircraft, and approximately 5,300 personnel will participate in an at-sea-only iteration of the biennial Rim of the Pacific (RIMPAC) exercise scheduled Aug.17-31, in the waters around the Hawaiian Islands.”

Though the Navy listed the facts, they forgot to mention one important one. The biannual RIMPAC exercises are the largest international maritime warfare exercises in the world, although admittedly this year’s addition will be one of the smallest on record and somewhat abbreviated due to the ongoing Coronavirus pandemic.

The normally six-week-long exercise has been cut by two-thirds to two weeks and will be a maritime-only exercise to limit exposure both to participant soldiers and sailors as well as the people of Hawaii.

The first RIMPAC exercise was held in 1971 and since then has grown and expanded to include a number of countries either geographically located in or otherwise interested in the Pacfic region. But which country was one of the more surprising former participants considering the current state of the world? China.

Rim of the Pacific

China participated in two RIMPAC exercises, in 2014 and 2016 despite the tension in the South China Sea due to China’s territorial dispute and militarization of islands in the area. During the 2014 exercises, Beijing slipped a secret participant in along with the four ships that were supposed to participate in the exercise.

Along with a hospital ship, a frigate, supply ship, and a destroyer, China also sent an electronic surveillance ship to the exercise. The ship, a Dongdiao-class auxiliary general intelligence (AGI) ship, is one of three such ships that China has in service and are used to gather data from ships and airplanes at sea. The ship even operated near the USS Ronald Regan and its carrier strike group as well as the main body of ships taking part in maneuvers.

Should I Stay or Should I Go?

Though China was initially invited to the 2018 RIMPAC exercises, they were disinvited by the United States, who cited their militarization of the South China Sea. Some have argued that this was a mistake. One of the benefits of international exercises like RIMPAC is it allows the United States to observe the dynamics between Chinese officers and sailors, a key metric of battlefield effectiveness. An argument could be made that removing China from RIMPAC represents an informational loss to the United States.

Disinviting China from RIMPAC would be hard to undo without looking like a fool. But, if China were to ever rejoin RIMPAC in the future—however unlikely—a good starting point would be to clarify that uninvited spy ships are just that—uninvited.