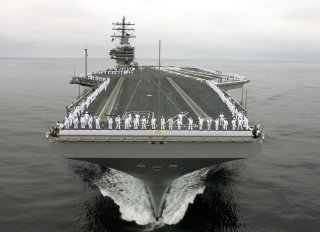 Monday marked the beginning of the United States Navy’s twenty-seventh Rim of the Pacific exercise, and even with the ongoing novel coronavirus pandemic, it will remain the world’s largest international maritime exercise, one that is designed to foster and sustain cooperative relationships with partner nations.

The exercise takes place in the waters surrounding the Hawaiian Islands, but across the Pacific in the South China Sea, the U.S. Navy concluded another operation as a show of force in the region that involved the USS Ronald Reagan Carrier Strike Group 5 (CSG 5).

“Integration with our joint partners is essential to ensuring joint force responsiveness and lethality, and maintaining a free and open Indo-Pacific,” said U.S. Navy Commander Joshua Fagan. Commander Fagan serves as Task Force 70’s air operations officer aboard USS Ronald Reagan. “The recent integrated training between our carrier strike group and Air Force B-1s is the latest example of how we are continually working to stay synched with all of our joint partners and ready to respond to any contingencies throughout the region.”

USS Ronald Reagan had departed its homeport of Yokosuka, Japan and began a CSG patrol in the region at the end of June. The nuclear-powered Nimitz-class supercarrier was launched in March 2001 and commissioned in July 2003. CSG 5 is the only forward-based carrier strike group home-ported in Japan and is part of the U.S. Seventh Fleet.

The recent drills involving CSG 5 come amid heightened tensions between the United States and China, but the Navy has noted that it regularly conducts operations and exercises with other U.S. military branches in the Indo-Pacific to build and maintain warfighting readiness that is responsive, flexible, and honors enduring commitments to mutual defense agreements with regional allies and partners. Operations such as these in the South China Sea are meant to demonstrate enduring America’s commitment to its allies and partners and to create a cooperative approach towards regional stability as well as freedoms of the seas.

During its service, the USS Ronald Reagan has taken part in numerous exercises. However, one exercise that the Navy might like to forget is the 2005 war game involving Sweden’s first-in-class HSwMS Gotland. The Gotland is an advanced and extremely quiet diesel-electric submarine that was equipped with an air-independent propulsion (AIP) system. The submarine, which has been described as one of the quietest in the world, “ran rings” around the American carrier task force and made multiple attack runs on the U.S. Navy’s carrier and was never detected.