RIP F-22 and F-35: How Russia or China Could Shoot Down America's Stealth Fighters 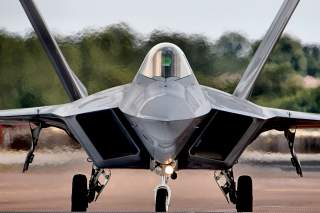 Once either China or Russia manages to put together a long wave IRST, high-speed data-links, and the computers and algorithms for multi-ship sensor fusion, the ability of U.S. fifth-generation fighters to operate independently will diminish.

With Boeing and the United States Navy explaining in detail how a combination of long-wave infrared search & track combined with high-speed multi-ship data networking and advanced sensor fusion algorithms can generate a weapons quality track on an enemy stealth fighter, it is only a matter of time before adversaries such as Russia and China develop similar capabilities.

Both Moscow and Beijing have most of the elements needed to develop and field counter-stealth technologies similar to that demonstrated by the U.S. Navy and Boeing during Fleet Exercise 2017 onboard a pair of modified F/A-18E/F Super Hornets using a combination of the powerful DTP-N processor, TTNT high-speed IP-based data-network and the long-wave Block II Infrared Search and Track (IRST) pod. The U.S. Navy will be fielding its new counter-stealth capabilities in the coming years as the Block III Super Hornet enters service in 2022. Given that both the Russians and the Chinese possess the individual elements of all the required technologies to replicate the U.S. Navy’s capabilities, it is only a matter of time before Moscow and Beijing start to field similar counter-stealth abilities.

The Russians—as Center for Naval Analyses research scientist Michael Kofman noted—have had infrared search and track sensors onboard their fighter aircraft for decades. Even the earliest versions of the Mikoyan MiG-29 Fulcrum and the Sukhoi Su-27 Flanker have had an IRST system installed. The Russians have continued to field modern fighters such as the Sukhoi Su-30SM and Su-35S with newer and more modern IRST technology even if the detection ranges are fairly unimpressive. Even the forthcoming Su-57 PAK-FA incorporates the 101KS-V infrared search and track system. “Like every Russian plane has a giant IRST pod in the front for the past 30 years,” Kofman said.

However, it is unclear what infrared wavelength the Russian systems use—but it is likely that it uses mid-wave infrared. Most military airborne infrared sensors tend to use middle wavelengths because of the good compromise between range and resolution capability. Long wave infrared was typically less common because while that part of the spectrum offers excellent range capability—and the ability to pick up extremely cool objects—those sensors were traditionally limited by poor resolution and clutter. However, the advantage is that a good long wave infrared sensor will be sensitive enough to pick up the heat generated by the disturbance of the airflow and skin friction of an aircraft travelling through the atmosphere.

Long wave infrared (LWIR) has long been a holy grail of sorts for the Defense Department. “Sensitivity could most directly be provided by developing detectors that responded in the 8–12-µm-long wavelength IR (LWIR) band. The LWIR band is a highly desired operating band because it provides the most signal for a given difference in temperature between an object and its background (e.g., when imaging terrestrial objects),” David Schmieder and James Teague wrote at the Defense Systems Information Analysis Center. “Unfortunately, that band is also one of the most difficult for detectors to work in because long-wavelength photons have lower energy than short-wavelength photons. So detecting LWIR photons also means detecting other low-energy products, such as latent heat-generated dark current and its associated noise.”

Boeing has largely solved the problems associated with noise, clutter and resolution using new algorithms and the enormous processing power of the DTP-N computer onboard the Block III Super Hornet. The result is a sensor that is sensitive enough to detect airborne targets at extended ranges beyond the capability of even an active electronically scanned array radar such as the Raytheon AN/APG-79. Nor is there any hiding from a long-wave infrared sensor—since the camera can pick up the heat generated by disturbance of air molecules or sunlight absorbed by an aircraft skin and emitted as background heat.

“If the enemy aircraft coming at you is low radar cross section—low radar signature—it is still emitting a heat signature,” Bob Kornegay, Boeing’s capture team leader for domestic F/A-18E/F and EA-18G programs, said. “So it helps us as the enemies are starting to develop their stealth aircraft. It helps us to defeat that by moving outside of that X-band range.”

The fact of the matter is that both the Russian and Chinese defense industries have experience building IRST sensors and should be able to develop a long wave infrared search and track pod without too much difficulty. By the same token, both the Russians and the Chinese have access to airborne data-networking capability. The Russian Mikoyan MiG-31 Foxhound is equipped with RK-RLDN and APD-518, the later of which can coordinate a flight of four jets. Newer Russian fighters such as the Su-30SM, Su-35S and the Su-57 also incorporate datalinks—as do their Chinese counterparts. However, the speed and throughput of these datalinks remain in question, but it is all but a certainty that both Moscow and Beijing have the wherewithal to develop high-speed high band airborne datalinks. Once the Russians and Chinese have the ability to link two or more longwave IRST-equipped jets via a high speed link, they would have most of the ingredients needed to build a counter-stealth capability.

That leaves the question of Russia and China being able to develop advanced sensor fusion algorithms, which is a challenging undertaking even for American defense contractors. It will take time, but it is likely that both nations have the ability to develop such software and the computing hardware to make it work. Beijing, which has more access to external sources of computing technology, is more likely to be able to develop such an avionics package first in the the relative near term. However, Russia will also probably be able to develop a similar capability given time—and possibly access to foreign processors from China perhaps if sanctions are not lifted. Once either China or Russia manages to put together a long wave IRST, high-speed data-links, and the computers and algorithms for multi-ship sensor fusion, the ability of U.S. fifth-generation fighters to operate independently will diminish. Indeed, the U.S. Air Force anticipated this development—the service noted that its F-22 Raptor would be increasingly challenged by the 2030s by new enemy capabilities.

“The timeline associated with pursuing F-22 production restart would see new F-22 deliveries starting in the mid-to-late 2020s,” the Air Force said in a 2017 report to Congress detailing F-22 production restart costs. “While the F-22 continues to remain the premier air superiority solution against the current threat, new production deliveries would start at a point where the F-22' s capabilities will begin to be challenged by the advancing threats in the 2030 and beyond timeframe.”

Majumdar is the former Defense Editor for the National Interest.