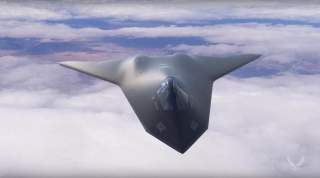 Drone fighter jets, hypersonic attack planes, artificial intelligence, lasers, electronic warfare and sensors woven into the fuselage of an aircraft - are all areas of current technological exploration for the Air Force as it begins early prototyping for a new, 6th-Generation fighter jet to emerge in the 2030s and 2040s.

While the initiative, called Penetrating Counter Air, has been largely conceptual for years, Air Force officials say current “prototyping” and “demonstrations” are informing which technologies the service will invest in for the future.

While all of these things are of course key parts of the equation, the Air Force Penetrating Counter Air program is equally focused on information exchange itself as a defining element of future war. Such an approach, looking beyond isolated systems and weapons themselves, envisions expansive “networked” combat with war platforms operating as “nodes” in a larger warfare system of weapons and sensors working together in real time.

“This approach is one that views military operations in terms of wholistic elements of an information-shooter-effector complex. That will require a lot more going into the design of the next generation of combat aircraft than how fast and far it can fly - or what the numbers of weapons it can carry,” Ret. Lt. Gen. David Deptula, former planner of the US air attacks in Operation Desert Storm and current Dean of the Mitchell Institute for Aersopace Studies, told Warrior Maven in an interview.

The program, highlighted in the Air Force’s “Air Superiority 2030 Flight Plan,” envisions what Cronin referred to as a “family of capabilities.”

“We are investing in technologies so we can eventually prototype and gain the knowledge we need to make decisions whether or not to continue with a potential capability,” she added.

Next-generation stealth technology, for instance, is of course a large focus of the technical equation. Newer radar absorbing coating materials, improved IR suppressants or thermal signature management, evolved radar-eluding configurations and acoustic reduction technologies offer a window into current areas of developmental focus. A 2013 Essay by the NATO Parliamentary Assembly Science and Technology Committee discusses the evolution of advanced heat reduction technologies built into the “skin” of an aircraft.

“By opening or closing the third air stream, the pilot can adjust the fuel intake of the jet engine and optimise its performance,” the report states.