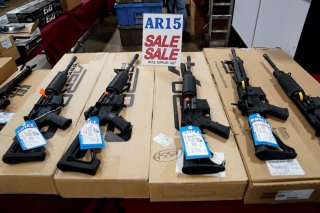 There is a popular saying “As California goes, so goes the nation.” While it certainly doesn’t always hold true—especially where the Second Amendment is involved, the Golden State could be one step closer to banning gun shows. This week, California’s Democratic Governor Gavin Newsom signed into a law a suite of gun safety bills.

Among these was a bill that makes it illegal to sell guns or ammunition on property run by the 32nd District Agricultural Association, notably Costa Mesa’s Orange County (O.C.) Fair & Event Center. SB 264 as originally introduced by state Sen. Dave Min (D-Irvine) had called for banning firearm sales on all state-owned properties, but it was later amended to only apply to the O.C. fairgrounds. However, it still ends all gun shows at the site. Since 1995, those gun shows have brought in $7 million in revenue for the fairgrounds.

On Monday, Min called the bill’s passage a major “first step” in reducing gun violence in Orange County. Min and his team were reportedly “caught off guard” when SB 264 was amended by the Assembly Appropriations Committee to apply only to the O.C. fairgrounds, but the state senator vowed to revisit a statewide ban in the future.

“The state should not be profiting off of what is essentially blood money,” Min told The Los Angeles Times, and also suggested that legal gun shows are places where alleged under-the-table deals and the purchase of parts for unlicensed ghost guns have taken place. “I think that’s an important moral line to draw in the sand right now.”

The End of California Gun Shows?

The efforts to ban gun shows in California aren’t exactly new and actually began in the late 1990s when Los Angeles County adopted a law that banned the sale of firearms and ammunition on its property, specifically the Fairplex, the county fairgrounds in Pomona, California, about 60 miles east of downtown Los Angeles.

When the law went into effect, it ended the Great Western Gun Show, which had been among the largest gun shows in the country. It attracted some 2,000 exhibitors as well as 35,000 visitors over the course of the weekend-long event. At the time, the show was estimated to have brought in $600,000 annually for the fairgrounds.

In response, in December 1999, the Great Western Gun Show announced that it would move to Las Vegas—where it continued to operate for a couple more years before folding, bringing an end to an event that was popular with vendors, hunters, collectors, and supports of the Second Amendment. Today, the Fairplex is home to the annual West Coast Historical Militaria Collectors Show, hosted by Bob Chatt of Vintage Productions—but the sale of firearms is still banned at the event.

Now it seems that California is continuing to close venues to gun shows, even those that bring in revenue to the sites. However, Min said other events could fill the void, such as a “Sustainability Decathlon,” which could bring in fresh proceeds to the fairgrounds.

“I think there are plenty of ways to make up revenue,” Min also told The Los Angeles Times. “But, then again, that’s not my job. My job is to make laws, and I believe a vast majority of people in the district I represent do not want gun shows at the O.C. fairgrounds.”