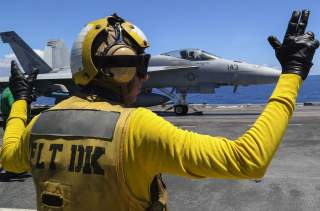 There are few places more busy and stressful than the deck of an aircraft carrier.

That's because a carrier is an airport planted on top of a ship. A U.S. Nimitz-class carrier is longer than three football fields, but that's a lot less acreage than even a regional airport on land. Still, a carrier has to be to launch, recover and prep jet aircraft, and do so quickly and efficiently. That means swarms of sailors pushing carts laden with bombs and missiles around a crowded floating airfield.

Maybe a robot can help?

The U.S. Navy is testing is experimenting with robots that can assist carrier deck crews. The Navy's Robotics and Intelligent Systems Engineering (RISE) Laboratory is "exploring how it can use robotics to reduce the number of sailors needed for the task of moving supplies around on an aircraft carrier’s deck," according to a Pentagon news release. "Ultimately, the goal is to have one sailor use a control panel to direct a robot to do the job that a small team of sailors currently does. RISE engineers hope the use of robotics will improve efficiency and safety, as well as optimize sailors’ workloads, freeing them from more monotonous jobs."

In this Navy video, you can see the little flatbed robots scurrying around a laboratory floor strewn with boxes. At least in the video, they don't bump into anything.

One engineer in the video describes how carrier deck crews use a weapons cart, which carries munitions to the aircraft. "It takes four sailors to move them around, one to steer and three or four guys to push. We took a look at that and thought, 'that's a lot of guys pushing things around on the carrier deck.'"

"The future of the carrier deck" is a robot directed by a sailor to go to a spot, pick some bombs up, and bring them to where they are needed, the engineer predicts.

But even the Navy researchers note there are still questions about a robot carrier crew. Will the robots be tough enough to survive corrosive salt water, or the vibration of a carrier deck (this writer has been on the deck of a Navy aircraft carrier, and can attest to the intense noise and vibration)? Will their software be smart enough to move the robots out of the way of another object, or will the robot assert its right of way?

"We don't wants sailors worrying about robots running over their toes," the Navy engineer says. They should worry more about a bomb-laden F-18 running over a robot.

These robots are still in the development phase. But given the expense of human sailors, and the exhausting nature of their work, it seems inevitable that robots will become a fixture on aircraft carrier flight decks.

Which leads to the inevitable question of how many sailors, and in which roles, can be replaced by robots. Drones are replacing military aircraft, to the point where the next generation of fighters and bombers may not have a human in the cockpit. On land, where robots already haul cargo, sniff out ambushes and disarm IEDs, robot tanks and autonomous trucks are on the way.

As for aircraft carriers, the thought of machines running one of the most dangerous weapons in the world is not necessarily reassuring. But that day may be coming.