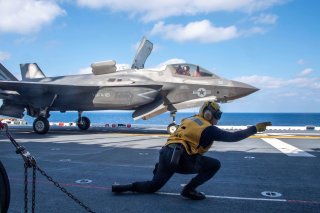 The exercises, which included U.S. units from Commander, Destroyer Squadron 15 (DESRON) and Japan’s JS Teruzuki, sought to solidify the U.S.-Japanese deterrence posture in the Indo-Pacific theater which, of course, pertains in large measure to efforts to contain Chinese provocations and aggression.

“JS Teruzuki and DESRON 15 conducted various training evolutions to include visit board search and seizure (VBSS), Expendable Mobile Anti-Submarine Warfare Training Target (EMATT), and electronic warfare exercises, which demonstrate the commitment of the U.S. and Japan to share information together at sea,” a Navy report on the exercises said.

The training also included the use of a U.S. Navy Carrier Air Wing, a significant development given that Japan’s large-scale $34 billion purchase of F-35 Joint Strike Fighters is now well underway. The F-35 will not only strengthen Japan’s ability to defend its airspace and conduct surveillance missions but also greatly improves U.S.-Japanese networking potential. All F-35 stealth fighters are engineered with a common data link called Multifunction Advanced Data Link (MADL) which seamlessly integrates all F-35s to one another with a secure, high-speed network enabling fast transmission of time-sensitive targeting data and mission-specific intelligence. Operating roughly 1,000 miles from the coast of China and within about 500 miles from Taiwan from Japan’s Southern Islands, ground-based Japanese F-35s can project massive amounts of power throughout the region and function as a critical deterrent.

Of equal or greater significance, Japan is also buying F-35B fighters, the variant used by the Marine Corps, which are capable of hovering and vertical take-off and landing. This means Japan will have the ability to project fifth-generation stealth aircraft power from amphibious assault ships within the Pacific theater, placing it within striking range of many vital target areas such as Taiwan or the Chinese mainland and disputed islands.

While China is also building its own fifth-generation stealth fighter,  the carrier-launched J-31, the People’s Liberation Army Air Force does not appear to have a vertical take-off-and-landing fighter variant like the F-35B. An inability to launch vertically means that J-31s will only be able to launch from carriers, thereby reducing China’s ability to project fifth-generation air attacks. Given this, it appears that any kind of Chinese amphibious assault upon Taiwan would not be likely to incorporate sea-launched fifth-generation air power, but will instead need to rely upon its small fleet of land-launched J-20 aircraft. This could put China at a distinct disadvantage when it comes to controlling the skies in support of an amphibious attack against U.S. and allies forces, particularly since both Japan and the U.S. Navy will be in a position to operate F-35Bs both independently and networked together.