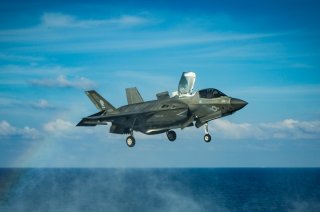 The Air Force’s F-35B Lightning II fighter jets were successfully tested aboard the Japanese ship Izumo, marking the first time since the end of World War II that a fixed-wing aircraft took off from a Japanese vessel.

The completion of the tests was announced earlier this week by the Japanese Maritime Self-Defense Force (JMSDF). “This verification is the first time for an F-35B fighter to land on a [Japanese Maritime Self-Defense Forces] vessel, and Japan is working to improve its capabilities in the maritime and air domains by steadily upgrading the Izumo-class destroyer in order to acquire the ability to operate [short take-off and vertical landing] STOVL aircraft,” according to a JMSDF statement. The announcement was accompanied by a three-minute video depicting parts of the launch and recovery process. The footage showed two F-35B jets flying overhead before cutting to a shot of one of them performing a vertical landing from different angles.

The tests were conducted with the help of two F-35B jets from Marine Fighter Attack Squadron 242 (VMFA-242 ). “This trial has proved that the JS Izumo has the capability to support takeoffs and landings of STOVL aircraft at sea, which will allow us to provide an additional option for air defense in the Pacific Ocean in the near future,” JMSDF Rear Admiral Shukaku Komuta, commander of Escort Flotilla One said via a press statement. VMFA-242 is one of two F-35B squadrons permanently stationed at the Marine Corps Air Station Iwakuni; the unit regularly participates in training activities with Japan’s Self-Defense Forces.

Izumo is the lead ship of the JMSDF’s two Izumo-class helicopter carriers. The Izumo completed the first of a two-stage overhaul process that will enable it to carry the F-35B earlier this summer, with modifications including heat-resistant deck coating and marking flight lines. The conversion work on Izumo is expected to be finalized by 2025; Izumo’s sister ship, the Kaga, is slated to receive the same modifications in 2022. “We still have work to do until the day the JSDF can regularly employ STOVL aircraft at sea, but I am confident that the strong partnership and mutual trust between our two counties will result in its realization,” Komuta said. Classified by Japan as a “multi-purpose operation destroyers,” the Izumo-class ships are currently the JMSDF’s largest surface combatants.

The F-35B is the STOVL variant of Lockheed Martin’s fifth-generation F-35 Lightning II stealth fighter jet. Equipped with an advanced shaft-driven lift fan (SDLF), the F-35B fighter jet has the unique ability to land vertically. This feature helps the jet to take off from short runways and allows it to potentially operate from surface ships smaller than full-fledged aircraft carriers. It was revealed in July that Japan plans on stationing its new F-35B fighter jets at the Nyutabaru Air Base on the east coast of Kyushu Island, putting them in an optimal position to link up with Izumo-class helicopter carriers departing from Self-Defense Force bases at Kure and Yokosuka. The F-35B jet’s STOVL capabilities provide Japan’s Self-Defense Forces with a crucial source of tactical redundancy, in that they can keep flying even if Japan were to lose its major conventional airbases over the course of a conflict with a potent adversary like China.

Spurred by the perception of a growing regional threat from Beijing, Tokyo has made sweeping investments aimed at revitalizing its aging surface ship and naval aviation roster. Japan has purchased forty-two F-35B and sixty-three F-35A fighters as part of a $23 billion contract for 102 such aircraft. Japan plans to procure a total of 157 F-35 fighter jet units, with the country’s first eight F-35B fighters scheduled to be delivered in 2024.