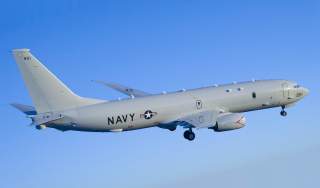 A Royal Air Force Poseidon patrol plane flew for the first time with a trial crew from No. 54 Squadron, the unit that’s testing the RAF’s planned fleet of nine Poseidons.

The first No. 54 Squadron flight took place at Naval Air Station Jacksonville in Florida in late December 2019. RAF Poseidon crews are training in Jacksonville ahead of the scheduled delivery of the first frontline Poseidon to RAF Lossiemouth in Scotland in February 2020.

No. 120 Squadron will fly the Poseidons from Lossiemouth. “Poseidon” is the name the RAF gives to the Boeing P-8 patrol plane. The U.S. Navy has ordered more than 100 P-8s. Australia, New Zealand, India, Norway and South Korea also have bought the twin-engine patroller, a variant of the 737 airliner.

In RAF service, the Poseidons finally will close a capability gap that opened in 2010, when the U.K. air arm withdrew all 21 of its Nimrod patrol plane. To surveil U.K. waters and to protect Royal Navy submarines entering and leaving port, the RAF and Royal Navy deployed helicopters and invited allied countries to send patrol planes.

The nine Poseidons aren’t sufficient, however, according to retired air vice-marshal Andrew Roberts. “However, capable though the P-8 may be, the number of aircraft planned is undoubtedly inadequate to fulfil even the highest priority tasks likely to be assigned to the force in tension and hostilities,” Roberts told a parliamentary committee in 2018.

It would take 15 Poseidons roughly to match the sustained patrol capabilities of the 21-strong Nimrod force. Complicating the Poseidon’s operational concept, the American-made patrol plane features a boom receptacle for mid-air refueling. RAF tankers use an incompatible hose-and-drogue system.

To refuel the Poseidons, the RAF will have to borrow the services of American or allied tanker planes. More likely, the Poseidons routinely will operate without aerial refueling, shortening their flight endurance.

First, the RAF should acquire an additional seven Poseidons at a potential cost of more than $1.5 billion. The air arm also should fit boom refueling systems to its new Voyager tankers. To allow the Poseidons to patrol more frequently, the RAF should add more personnel so that each plane has more than two assigned crews.

The RAF also could consider employing the Poseidon in a land-surveillance role, although this could require the service to acquire even more of the planes. The U.S. Navy deploys P-8s fitted with secretive under-fuselage APS-154 radars in an overland mission.

The APS-154 includes a ground-moving-target-indicator function that allows it to track vehicles and people moving across open ground. The GMTI function is essential to accurate precision targeting. The RAF currently flies five Sentinel surveillance planes with GMTI radars but plans to retire them by 2021. Poseidons with APS-154s could fill that gap, too.

The RAF is reviving its patrol force just in time. The Russian navy in recent years has become much more active in northern waters. The Russian fleet in mid-October 2019 deployed submarines in the country’s biggest undersea exercise since the Cold War.

At the same time, an additional two boats -- the nuclear-powered Sierra-class attack submarines Pskov and Nizhny Novgorod -- sailed into roughly the same waters for tests and training. The 10 vessels represent around 20 percent of the Russian submarine force.

No RAF planes participated in the patrol surge, of course. The Poseidons won’t be arriving in the United Kingdom until early 2020.