Why Did Russia Launch 8 Submarines All at Once? 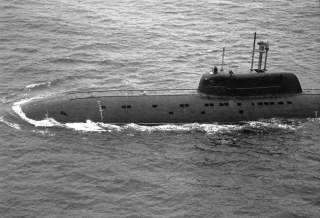 Key point: Moscow is still working to rebuild capabilities that it lost after the collapse of the Soviet Union.

The Russian navy in mid-October 2019 sortied eight submarines in the country’s biggest undersea exercise since the Cold War.

The 10 vessels represent around 20 percent of the Russian submarine force. For comparison, the U.S. Pacific Fleet with its roughly 30 subs as recently as 2013 reliably could deploy eight boats on short notice. The U.S. fleet in total operates more than 50 submarines split between the Pacific and Atlantic Fleets. This number is shrinking.

The Russian exercise seems to underscore Moscow’s new approach to undersea warfare. While the current war game reportedly is defensive in nature, the same submarines could conduct offensive operations from the same waters.

During the Cold War, Soviet submarines needed to pass through the maritime chokepoint between Greenland, Iceland and the United Kingdom -- the so-called “GIUK Gap” -- in order to reach the open ocean and close within striking range of NATO ports and ships. That’s not the case with newer Russian subs with their longer-range weapons.

“Russian submarines no longer have to transit the gap to have a dramatic impact on the European military balance,” Andrew Metrick, an analyst with the Center for Strategic and International Studies in Washington, D.C., explained in Proceedings, the professional journal of the U.S. Naval Institute. “Rather, they can operate from the relative safety of bastions in the Norwegian and Barents seas and strike targets across Northern and Central Europe.”

"To respond adequately, the United States and NATO must move beyond the outdated barrier-defense concept and fully embrace open-ocean [anti-submarine warfare], with far greater emphasis on operating in contested waters well north of the Arctic Circle," Metrick advised. "Instead of static ASW barriers, the United States and NATO must shift to a model of mobile ASW nets that can be rapidly constituted and focused on likely areas of operation."

"This will require developing a new generation of ASW capabilities," Metrick pointed out. "Chief among potential systems are large unmanned underwater vehicles with considerable on-station time to provide initial cueing for other ASW assets."