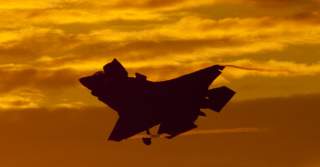 On September 28, 2018 an F-35B Lightning II jump jet piloted by Cmdr. Nathan Gray hovered down for a landing on the HMS Queen Elizabeth off the coast of Maryland—the first fighter to land on a Royal Navy carrier in eight years. It was followed by another F-35B piloted by a Royal Air Force pilot.

Over the next eleven weeks, the UK and the United States will fly two F-35B test airframes pilots to perform 500 more takeoffs and landings on the carrier. The Queen Elizabeth is expected to enter routine operational service in 2020 or 2021.

Just over a century ago the Royal Navy deployed the first ever aircraft carrier with a flight deck from which aircraft could takeoff and land, and in 1918 dispatched six Sopwith Camels on the first carrier-based air strike in history, targeting the zeppelin base at Tondern. In subsequent decades, the Royal Navy carriers played a critical role projecting British sea power—particularly during the 1981 Falklands War.

But the budgetary crunch of the Great Recession led the Royal Navy to prematurely retire all three of its Invincible-class carriers (two in 2010, the third in 2014) as well as the Harrier GR9 jump jets that flew off them—leaving the world’s once preeminent sea power without any carriers with operational fighters.

Launched in 2014, the Queen Elizabeth was the first of two huge new replacements grossing three time the weight of the preceding Invincible-class at 71,600 tons. In 2017 she was joined by the Prince of Wales, which narrowly avoided cancelation. The new class is distinguished by having two islands (raised superstructures) on the starboard side of the 280-meter long deck—the forward for ship navigation, the aft for flight control. But until this September, the new carriers didn’t have jets to fly off them.

The QE-class carriers are the largest warship ever built by the UK In fact, they are the largest actively serving anywhere in the world today save for two big exceptions: the Nimitz and Gerald Ford-class nuclear-powered carriers of the U.S. Navy. While the American supercarriers retain significant advantages over their British brethren, they come at an important price: the new Gerald Ford-class will cost between $10 to $14 billion each, while the two QE vessels together cost the equivalent of $8 billion. The QE carriers have a crew complement of 679 personnel plus up to 1,000 in the carrier air wing—less than third of the personnel required for a U.S. carrier.

Nuclear propulsion provides near limitless range and allow high sustained cruising speeds of thirty knots, which among other benefits, allows a carrier to outpace diesel-electric submarines, which rarely much exceed twenty knots. However, nuclear propulsion would have added billions to construction and operating costs of the British carrier. Instead, they employ two gas turbines and four diesels to generate 110 megawatts to power ship systems and impel its propellers. The QE vessels are only slightly slower at twenty-five knots—and some reports suggest they may even exceed thirty. While the British vessels will require refueling with a range of 10,000 nautical miles, a nuclear carrier’s unlimited range is also constrained by the need to replenish aviation fuel.

However, a carrier’s value comes ultimately comes from the aircraft it carries. UK defense planners had to choose between furnishing the new carrier with jump jets like the Harriers deployed on the Invincible-class, or installing a Catapult-Assisted Take Off and Barrier Assisted Recovery (CATOBAR) system to launch higher-performance fighters carrying heavier weapon and fuel loads.

The UK was a major partner to the American F-35 program, and conveniently the stealth fighter came in both the F-35B jump jet model and the F-35C CATOBAR-takeoff variant. Originally, the Royal Navy intended to configure one carrier for each type. However, after calculating that a CATOBAR carrier would cost an extra $2 billion, the defense ministry stuck with the jump jets.

Though the F-35B has shorter maximum range or payload than other variants, it’s still a far superior fighter compared to the Harrier. The Lightning’s stealthy radar cross sections allows it to penetrate deep into enemy airspace before being detected on radar by opposing fighters or surface-to-air missile batteries. Despite being a bit slower than most fourth-generation fighters with a top speed of Mach 1.6, the F-35 is a lot faster than the Harrier’s subsonic Mach 0.86 to 0.95. British F-35Bs are also configured to employ ASRAAMs, a short-range heat-seeking missile which outranges its peers by 25 to 50 percent.

The F-35Bs usually perform a short-distance takeoff using a ski jump ramp on the end of the QE’s flight deck—it’s when they return for landing that they switch to vertical lift mod. There’s a fly in the jump jet ointment, however—the 1,500 degrees centigrade temperatures generated by the exhaust threaten to damage the carrier decks. Operational tempo will be restricted until special heat-resistant paint is applied.

Vertical-landing still imposes limitations on the Lightning II’s fuel and weapons load on missions. To overcome this, the Royal Navy is studying how to perform Shipborne Rolling Vertical Landing—a technique combining horizontal thrust from a conventional jet engine with vertical thrust from the lift fans to perform a hybrid landing approach at a speed of fifty-seven knots.

The Royal Navy’s new carrier air wings will count up to 36 F-35Bs between them (contemporary U.S. carrier air wings count fifty to sixty combat aircraft), and be capable of dispatching them on 70 sorties per day. However, though as many as fifty to seventy Lightnings could be crammed on the deck, in reality, the British carriers may routinely deploy with only one or two squadrons of twelve. The first unit will actually be the RAF’s No. 617 squadron, joined by the Royal Navy’s 809 Naval Air Squadron in 2023. Between them, they will total all twenty-four front-line F-35s out of forty-two currently on order for the UK.

It’s worth noting that U.S. Marine F-35Bs performed their first combat mission on September 27—and that also on the 28, an F-35B accident resulted in the type’s first airframe loss.

The QE carriers can also accommodate a “Littoral Maneuver” package, which can include RAF Chinook heavy transport and Army Apache attack helicopters, as well as medium-sized Merlin and Wildcat choppers that could rapidly deploy up to 250 troops into combat.

Carriers mostly depend upon their fighters and a defending taskforce of surface warships to protect them from enemy aircraft and missiles—but most can contribute a little to this layered defense with their own air defense missiles. However, the QE-class is lightly defended with only three Phalanx Close In Weapons Systems (CIWS), rapid-firing Gatling cannons designed to shoot down incoming missiles seconds before impact, supplemented by additional guns to defend against small boats.

Though CIWS have proven effective, the lack of longer-reaching defensive armament is surprising given the proliferation of supersonic anti-ship cruise missiles which may simply approach too fast to be reliably tackled by CIWS. Furthermore, the Royal Navy currently counts only 19 frigates and destroyers, meaning a full six-ship escort force would require one-third of the surface fleet.

At least the QE carriers will benefit from two powerful radars, the area-searching S1850M which has a range of 250 miles, and the Artisan 3D Active Electronically Scanned Array radars which can detect finer targets up to 125 miles away—hopefully buying the carrier time to coordinate an effective response.

While the Queen Elizabeth-class don’t have every feature one might want from a carrier, they remain huge ships built at a very reasonable price, and have been purposefully designed with extra space for future upgrades should the UK decide to beef them up down the line—and procures additional F-35s to equip more than two squadrons.