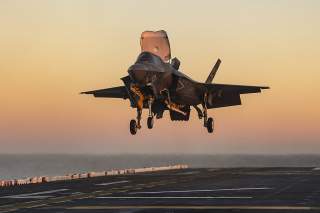 Early in the morning of September 27, 2018 F-35B stealth fighters of Marine Fighter Attack Squadron 211 took off from the Wasp-class amphibious assault ship USS Essex in the Arabian Sea, taking advantage of its short-takeoff characteristics to lift from its 257-meter long deck.

Though the Pentagon did not detail its flight path, the jets likely flew east, skirting around Iran’s south-eastern coastline, then north across Pakistani airspace into southern Afghanistan, traversing at least seven hundred miles if not more. Due to the F-35B’s short range, it can be safely inferred that the jets were refueled by a tanker, or topped off at a U.S. base in Afghanistan.

Over Kandahar province, the jets, which were loaded with 25-millimeter cannon pods, 1,000-pound JDAM GPS-guided bombs and GBU-12B Paveway II laser-guided bombs, effected an airstrike against fixed Taliban targets in support of a ‘ground clearance operation,’ according to the Pentagon.

The jump jets then made their way back to the Essex and used their vector thrust engines and lift fans to hover down to the deck like helicopters.

Immediately prior, six F-35Bs VMFA-211 had been readied for combat in support of Special Forces operators in Somalia combating al-Shaabab insurgents while the Essex cruised off the Horn of Africa, but the Marine jet’s intervention did not prove necessary.

Nonetheless, this marked the first combat deployment by the U.S. military of the F-35 stealth fighter after more than two decades and hundreds of billion of dollars invested in its development.

Of course, the F-35’s unique and expensive radar-stealth capabilities would have been of no particular utility combating insurgents armed with assault rifles and machine guns. The Pentagon insists, however, that it was merely making use of assets available at hand and not conducting a deliberate test.

The U.S. military intends for the three major variant of the F-35 to dominate the early-to-mid twenty-first century fighter fleets of the Air Force, Navy and Marine Corps. As such, the F-35 is the most expensive weapons program in human history—but it’s also been plagued by an expensive and buggy development process—though one that until recently has been spared major accidents.

It so happens that the day after the type’s first strike, a Marine F-35B crashed five miles away from Marine Corps Air Station Beaufort in South Carolina. The airframe was a total loss, but fortunately the pilot ejected and survived.

Earlier in 2018 The Israeli Defense Force actually deployed its unique F-35I Adir models into combat before the U.S. military, using them to perform strikes and reconnaissance missions over Syria and Afghanistan, though the IDF is coy about the details.

However, the F-35s deployment for a raid in Afghanistan is an important milestone—particularly as the Marines are by far the most enthusiastic adopters of the F-35, being the first service to declare Initial Operating Capability with their F-35B variant in 2015—four years ahead of the Navy’s F-35Cs. However, the Corp’s IOC declaration was only possible by bending or ignoring regular IOC criteria.

The Marine Corps’s experiences during the island-hopping campaign of Pacific War have left it obsessed with maintaining its own on-call air support that can fly off the decks of the smaller amphibious carriers of its ‘Gator Navy’; or deploy to remote islands or recently conquered beachheads in support of expeditionary forces.

Arguably, the service suffer from ‘Navy-abandonment’ jitters after episode such as the Battle of Guadalcanal, where a Navy covering force had to withdraw after landing the Marines on the island, who were then subject to weeks of nightly bombardment by Japanese battleships and bombers.

This is why the leathernecks enthusiastically embraced the vertical-takeoff or landing (VTOL) capabilities of the Harrier jump jet. However, though the Harrier could engage in air-combat if necessary—British Harriers shot down twenty-three Argentine fighter-bombers during the Falkland Wars—they cannot attain supersonic speeds and have limited range, making them far from top-tier air superiority aircraft.

When the Pentagon decided that it would have a ‘Joint’ Strike Fighter used by the Navy, Marines and Air Force, the Marines insisted their variant had to be a jump jet. However, the resulting design to accommodate the capacious vertical lift fans left even the versions of the F-35 without with the lift fans with inferior performance parameters compared to preceding jet fighters. Worse, the three F-35 models only ended up having 25 percent parts commonality.

Still, the Air Force and Navy still maintain that the advantages granted by the F-35’s stealthy radar cross section, networked sensors and state-of-the-art computers are more relevant to twenty-first century air warfare than its performance deficits.

For the Marines, however, the F-35B model is an undisputed improvement over the Harrier’s air-to-air capabilities, as it can fly up to 1.6 times the speed of sound—at least once certain testing criteria are met—and its stealth characteristics make it far more viable in air-to-air combat.

The B-model’s lift fans nonetheless make each plane roughly a 33 percent more expensive than the F-35A at $122 million per plane, weighs two tons more than the A model, carries only two thirds the weight in fuel, and thus has three-quarters the combat radius at 580 miles. Unlike the A model’s internal gun, the F-35B must carry a four-barrel 25-millimeter GAU-22/A Gatling cannon on an external pod, and is limited to hefting smaller weapons internally.

To reiterate—a lot of design compromises were necessary to incorporate that VTOL capability. However, the Corps feels the those are worth it if that means Marine infantrymen can count on air support from F-35Bs when and where they need them. Even here, though, there is concern taht the F-35B’s vertical lift engines generate such hot exhaust they threaten to melt the carrier flight decks beneath them—or even runways on ground bases. This limits how many sorties they can generate, at least until the decks are modified.

The ability of the F-35B to operate off smaller carriers has nonetheless attracted significant interest overseas. Both the British Royal Navy and the Italian Marine Militare will have the F-35B serve as their naval fighter of choice, with orders for 100 and 15 respectively. Japan and Turkey are also reportedly interested in ordering F-35Bs to supplement their land-based F-35As, though Turkey’s future F-35 procurement is currently in question. Tokyo’s interest is linked to a desire for planes that can operate off large ships without calling them ‘carriers’ per se, as that label supposedly implies an offensive warfare role that’s anathema to the JSDF’s strictly defensive mission.

It so happens that VMFA-211 has some history when it comes to the war in Afghanistan—specifically, it lost six Harrier jump jets there in September 14, 2012, with two more heavily damaged.

The culprit wasn’t MiGs, flak cannons, or advanced surface-to-air missiles, but rather a fifteen-man Taliban hit squad disguised in American uniforms. At 10 PM, the infiltrators slipped past the British and Tongan Army security detail at the Harrier’ base at Camp Bastion. The lone survivor later claimed they were gunning for Prince Harry, who was stationed there with the 3rd Regiment of the Army Air Corps at the time.

The Taliban split up into three groups, two of which stormed the flight line and began blasting the Harriers with explosive charges and rocket propelled grenades. VMFA-211 squadron commander Lt. Col. Christopher Raible left the mess hall with body armor and a pistol and organized squadron mechanics to lead a two-prong counter attack to save the remaining jets.

However, as he ran to check on troops at a nearby hangar, it was struck by a rocket propelled grenade. Shrapnel from the blast struck the Marine aviator in the neck, causing him to bleed to death and killing Marine Sgt. Bradley Atwell. The squadron’s mechanics and fliers then counter-attacked, pushing the five-man sabotage team into a corner of the base which was then blasted by Marine helicopters.

Brad Howard of Task & Purpose later called attention to a compelling detail he spotted in the video released by the Marines: one of the F-35B filmed flying on its first U.S. strike is inscribed with Raible’s name below the canopy.