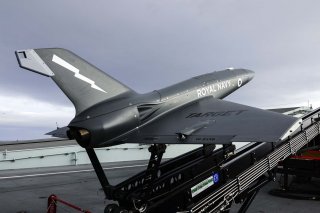 Following the demonstration of drones onboard the Royal Navy aircraft carrier HMS Prince of Wales last year, the senior service of the United Kingdom is now reported to be moving forward with its "Project Vampire."

The program is built to procure low-cost fixed-wing drones for intelligence, surveillance, and reconnaissance in addition to electromagnetic operations and threat simulation. It is part of the Royal Navy's initial increment of its Future Maritime Aviation Force (FMAF) program.

In September 2021, the Banshee Jet 80+ aerial target vehicle was used in demonstrations on the aircraft carrier. Managed by the Develop Directorate within Navy Command, the FMAF program is now exploring the transition to a number of aviation roles – intelligence, surveillance, reconnaissance, communications, lift, and strike – from crewed to uncrewed air platforms, Janes reported.

According to an updated contract tender notice, "Project VAMPIRE sits within the Develop Directorate of Navy Command and aims to address a number of capability problem sets utilising a low-cost Fixed Wing Uncrewed Air Vehicle (UAV) as a means for the development of operational concepts, payload types, and associated communication and digital architecture."

The "Drones (Unmanned Aircraft Vehicles) for Maritime Operation – Thematic Research" report from GlobalData stated that naval users currently account for 28 percent of the global UAV market, which is also expected to grow from its current $8 billion to $15.9 billion in value by 2031.

"A number of factors are fuelling the demand for unmanned platforms, including territorial disputes such as those between China and its neighbours in the South China Sea, as well as security threats from piracy to near-peer conflict," added Marques.

Project Vampire is one of several unmanned programs in the Future Maritime Aviation Force initiative exploring options for drones that can perform a range of tasks including electronic warfare (EW), airborne early warning (EAW), and anti-submarine warfare (ASW). These platforms could provide a dynamic and potent capability spectrum to the Queen Elizabeth-class aircraft carriers across its planned fifty-year lifespan, GlobalData's report added.

Last month, the Royal Navy also announced that it would invest £458k on two tethered Uncrewed Air Systems. Those systems would provide considerably increased flight duration, and the ability to flexibly integrate differing payloads – this includes a flight time of up to twenty-four hours while being able to carry a maximum payload of 25 kilograms kg, and have an operational altitude of ninety meters.

"Unmanned platforms benefit from low operating costs and high endurance," continued Marques. "This makes them an effective way for navies to affordably multiply their combat ability and increase the coverage of their forces, widening surveillance and strike ranges via high-endurance drones. Technological advances in sensors and weaponry, in combination with multi-mission drones and mission-specific payloads will likely escalate the operational tempo and lethality of naval warfare significantly. This will drive growth and competition in the unmanned systems market. The Royal Navy is not alone – the U.S., China and Russia all have similar maritime drone projects."

In addition to aerial vehicles, the Royal Navy has continued to invest in underwater drones as well. In March 2020, the British Royal Navy announced awarding a contract for an unmanned submarine, a drone that will be thirty meters long, or about 100 feet, and have a 3,000 kilometer (1,900-mile) range.