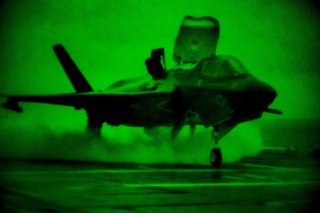 It is sometimes fashionable for a "royal" to be a little tardy, and in this case it was truly a case of better late than never last Wednesday. The Royal Navy's flagship aircraft carrier HMS Queen Elizabeth finally left Portsmouth after delays due to cases of the novel coronavirus being found amongst her crew.

The carrier, which is still undergoing training in preparation for her maiden voyage next year, was originally scheduled to depart on Monday but after a few cases of the highly infectious illness were discovered the training mission was postponed.

"A small number of HMS Queen Elizabeth's personnel have tested positive for COVID during routine preparation for sailing," a Royal Navy spokesperson told Forces.net. "Those affected have been isolated and are working with the NHS Test and Trace system to ensure the virus does not spread further. The crew will continue to follow appropriate health guidelines and the HMS Queen Elizabeth will depart once their status has been confirmed."

Earlier this month, the "Wake Island Avengers" of Marine Fighter Attack Squadron (VMFA) 211 flew to the United Kingdom to train with the Royal Air Force (RAF) Squadron 617 "Dambusters." VMFA-211 became the second fleet squadron in the Marine Corps to operate the F-35B Lightning II as their primary aircraft at the end of June 2016.

"Flying that far required an immense amount of skill from the maintainers who prepared the aircraft and the pilots who conducted mission planning, aerial refueling and vertical landings after a nine-hour flight," 1st Lt. Zachary Bodner, a spokesman for VMFA-211, told USNI News in a statement. "Realistic training is essential to maintaining our combat readiness."

The aviators didn't get to live it up in the UK upon their arrival and instead due to the Covid-19 pandemic the Marine aviators had to quarantine at RAF Station Marham. During that time they used simulators to help familiarize themselves with the local airspace and procedures. The Marines and their British colleagues will then take part in preparation for the joint deployment to the new carrier.

"The training is designed to validate F-35 digital interoperability with 617 Squadron in preparation of our deployment next year as part of Carrier Strike Group 21," added Bodner. "The development and refinement of our shared war-fighting capabilities further strengthens our special partnership with the United Kingdom and solidifies stability within the geographical combatant command."

Unlike U.S. Navy aircraft carriers, which feature catapults, the HMS Queen Elizabeth features a ski jump style flight deck. However, the training between the Marines and the RAF will include the F-35B Lightning II, which features a vertical lift fan and pivoting engine nozzle to deliver vertical landing and short takeoff capability. It is able to operate aboard the U.S. Navy's amphibious assault ships (LHA), such as the USS America (LHA 6).