Why America's Newest Amphibious Assault Ship Is Such a Big Deal 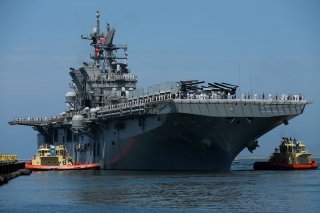 The U.S. Navy’s second America-class Amphibious Assault ship has set sail for its homeport of San Diego and is preparing for its maiden deployment.

The recently commissioned USS Tripoli is an aviation-centric amphibious assault ship built to project power with Osprey helicopters and F-35B stealth fighters at great standoff distances. The ship is anticipated to be a home port, sea-based backbone for Marine Corps Expeditionary Units preparing for amphibious assault.

While the third America-class ship incorporates the traditional well-deck for launching ship-to-shore connectors and amphibious assault vehicles, the first two America-class boats are built to project massive amounts of airpower, with more onboard hangar space for aircraft and specific accommodations for the F-35B Joint Strike Fighter.

A July 24 news release from Huntington Ingalls shipbuilding reported that the USS Tripoli had ventured out of its shipyard toward California. The USS America, a first in class for the Navy’s new fleet of amphibious assault ships, completed a successful deployment last year with numerous F-35Bs on board. F-35Bs can not only rely upon stealth technology and long-range sensors to attack enemy forces and air defenses, but small fleets of F-35s can rely upon a common data link to operate as aerial “nodes.”

This will give the aircraft an opportunity to share intelligence information with one another as well as network with surface ships or even ground assets. The Pentagon’s amphibious attack strategy is also being heavily informed by a “mother ship” concept wherein manned amphibious assault ships perform command and control for fleets of drone ships and aircraft. This aligns with the Navy’s current initiative to develop a “ghost fleet’ of interconnected unmanned surface vessels able to coordinate attacks, share intelligence, network with air and undersea assets using a collection of advanced computer algorithms. With humans in control, some of these unmanned systems could be armed with weapons, operate forward in high-risk areas and even attack or test enemy defenses.

The intent with the F-35 is to adapt to newer threat environments requiring amphibious attacks to operate in a more dispersed, or disaggregated fashion. More concentrated attack forces naturally make an easier target for potential enemies, and newer applications of AI-enabled networking and drone-autonomy massively changes the reach and scope of amphibious attack dynamics.

Newer, faster Ospreys, engineered with an emerging Digital Interoperability network, allow in-flight Marines to receive crucial intelligence updates while en route to an attack. This is quite significant as there are likely scenarios wherein enemy forces shift location, add new weapons or simply reinforce their positions.

Also, Marines can land for an attack equipped with the most recent and up-to-date mission data, navigational details and force location information. Ospreys are also known to support Mounted Vertical Maneuvers. These are transport attack operations intended to deliver small groups of well-armed Marines behind enemy lines for surprise attacks, hit and run operations or missions to disable enemy supplies and communications.