China's Plan to Take on the F-35B Stealth Fighter 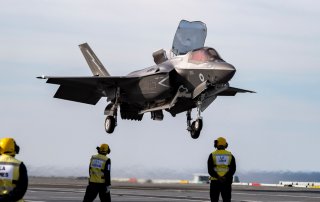 China may be spinning up an entirely new class of amphibious assault ship with cutting edge fixed-wing attack capabilities and an electromagnetic catapult as part of a transparent effort to counter the U.S. F-35B.

The possibility, introduced as very realistic and evidence-based speculation, was floated in an article in the Chinese-backed Global Times newspaper. The new class, described as a Type 076, would be a successor to the already under construction Type 075. China is already building a second Type 075 as part of a visible effort to further empower its amphibious assault capability.

The thinking about a new class of Chinese amphibious assault ships incorporates the prospect of fixed-wing aircraft propelled by an electromagnetic catapult, similar to the U.S. Ford-class carrier system.

Clearly, U.S. amphibious assault strategy has been adjusting to new threats in several specific respects. Not only is the U.S. Navy is arming its WASP and America-class amphibious assault ships with upgraded Ospreys and F-35Bs, but the service is developing amphibious assault ships as mother ships, able to dispatch and operate small fleets of attack and surveillance air and surface drones. The concept is to have larger manned ships operate in a command and control capacity, while operating amphibious operations at safer standoff distances. Such an approach can leverage the range and advantages of stealth air attack, long range networked assault missions and drone boat attacks to find vulnerable points across enemy coastline or even launch a direct attack. The U.S. Navy is also further arming its amphibious assault ships with lasers and other types of offensive weapons as well.

Also, drone boats and even the F-35 can operate as aerial nodes to identify and relay data regarding threats beyond the horizon; a new combat threat environment is all about range and dispersed operations to optimize the use of newer, more advanced technologies and reduced vulnerability. Naturally, a more condensed fleet could be more vulnerable to successful enemy strikes.

The use of unmanned systems is, not surprisingly, mirrored by China’s apparent amphibious assault strategy, given its emerging fleet of 5th Gen fighters and stealthy attack drones. The report in the Global Times mentions the Chinese GJ-11, a stealthy attack drone which “made its debut at the 2019 National Day military parade, and Type 076 could be equipped with similar drones.”

“The Type 076 could become more like a modern,  medium-sized aircraft carrier,” the Global Times writes.