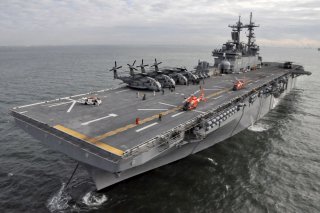 The ship is described at the second Type 075 Landing Helicopter Dock (LHD), somewhat analogous to the U.S. WASP-class. This Chinese amphibious assault ship reportedly displaces as much as 30,000 tons and is able to carry as many as 28 helicopters, a report from Naval News states. The report adds that the new People’s Liberation Army Navy LHD is likely powered by a diesel engine with 9,000kW, four Close In Weapons Systems and HQ-10 surface-to-air missiles. The new ship’s “aim is likely to increase the “vertical” amphibious assault capability with the very mountainous East Coast of Taiwan in mind,” the Naval News report writes.

The addition of more LHDs certainly increases China’s maritime attack power, making it a formidable threat along the Taiwanese coastline. Photos of the ship show well-deck in back, capable of launching ship-to-shore transport craft similar to the U.S. Navy Landing Craft Air Cushion or newer Ship-to-Shore Connector. Such a configuration makes it appear somewhat similar to U.S. Navy WASP-class which, unlike the first two ships of the America-class, also operates with a well-deck from which to launch large-scale amphibious assaults.

The Chinese LHD operates with a displacement of roughly 10,000-tons less than its U.S. counterpart. However, despite an apparently smaller size, it may operate with as many or more helicopters; if reports that the Chinese LHD can operate 28 helicopters are true, that would appear to be a larger number than the roughly 22 operated by U.S. LHDs. Regardless, it does not appear as though the Type 075s operate anything like the Short-Take-off-and-Landing F-35B stealth fighter which launches from U.S. LHDs. F-35Bs, combined with Harrier Jets and Ospreys are likely to push the number of aircraft operated by U.S. LHDs somewhat higher than that Type 075. The aviation centric first two America-class ships and the legacy WASP boats both now operate with F-35s.  Having the F-35 is likely to give U.S. LHDs a decided advantage over these emerging Chinese counterparts; not only does it bring the prospect of stealth and air support, but also brings new dimensions of ISR to maritime warfare. The possibility of establishing air supremacy during an amphibious assault with an F-35 or even merely fortifying an advance with 5th-generation air power, is reshaping amphibious attack strategy with unforeseen advantages.

While threats to Taiwan may jump out as the first and most apparent area threatened by expanding Chinese amphibious forces, the South China Sea will also be increasingly vulnerable. In particular, when it comes to ship-to-shore transports, a Type 075 could dispatch groups of troops, weapons and even armored vehicles for attack, as well as large numbers of amphibious assault vehicles. Several of these ships operating in tandem would easily enable a Chinese amphibious assault to annex or overwhelm large areas of the disputed island areas. Also not likely to be lost on U.S. observers is that two capable LHDs of this kind massively increase China’s expeditionary capability, introducing new dimensions to the prospect of large-scale amphibious attacks against major-power target areas around the globe.