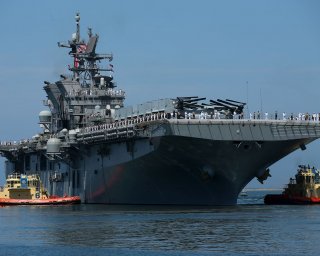 The USS Tripoli, called LHA 7, is like its predecessor the USS America designed to optimize new aviation assets such as the F-35B and upgraded Osprey helicopters.

Currently, a third America-class amphibious assault ship, the LHA 8, is being built and it also incorporates the return of a more traditional well-deck for ship-to-shore ocean amphibious assaults. However, the first two ships of the America-class have been deliberately designed to maximize air attack, air supremacy and drone coordination as part of a specific response to newer, long-range weapons and sensors threats posed by adversaries.

The USS America and USS Tripoli have particular aviation-centric adjustments such as an enlarged hangar deck, realignment of the maintenance facilities, increased stowage and greater fuel capacity, a Navy report said. The ship is 844 feet in length, has a displacement of approximately 44,000 long tons, and will be capable of operating at speeds of over 20 knots.

Part of the intention for the ship is to properly configure the platform to launch and operate the Marine Corps F-35B. Specifically, Navy engineers added special coating materials to the ship’s deck in order to mitigate any possible heat damage caused by the vertical-take-off and landing F-35B. Structural elements of the ship were also modified to ensure the vessel could fully and properly accommodate the F-35.

Not only could it help ensure an advancing amphibious assaults were less vulnerable to air attack, but the aircraft brings unprecedented intelligence, surveillance, and reconnaissance technology as well. For instance, an F-35B can conduct air assaults, drop and fire weapons or also operate as an aerial sensor node to acquire and transmit essential sensor data.

This is part of the reason why modern amphibious assault strategy incorporates a much larger role for unmanned systems and air-ground-surface communications networking.

Longer-range inland air attack can also be enabled by Ospreys, which are engineered to conduct sensitive operations, such as Mounted Vertical Maneuvers wherein Marines are transported and dropped behind enemy lines for clandestine operations.

Forward operating inland combat units, if securely and effectively transported, could disrupt enemy supply lines, function as a communications node or even launch targeted attacks to prepare the shore for an amphibious landing. Longer-reaching weapons, sensors, drones and new technologies such as on-board lasers can facilitate successful and less risky amphibious shore attacks without necessarily need to send manned-units from ship-to-shore.