The U.S. Navy Is Quietly Starting a Drone Revolution in Naval Warfare 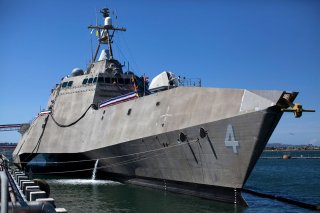 The U.S. Navy is moving quickly to introduce and deploy large numbers of interwoven, armed surface drones, a move bringing an entirely new sphere of tactics, techniques and procedures. These surface drones include medium, large and small Unmanned Surface Vehicles (USVs). The service plans for them to be operating in tandem with surface ships, undersea drones, aerial drones and submarines. This promises to change the character of maritime warfare. USVs could help foster an impactful cross-domain tactical option that links air, surface and undersea assets into an integrated command and control network.

A fast growing fleet of USVs, it would appear, could bring the promise of greater forward-deployed command and control, along with an increased ability to integrate a range of otherwise separated functions. For instance, it seems entirely plausible that a new medium Unmanned Surface Vehicle could combine submarine hunting with mine-countermeasures, command and control and surface attack.

As a forward positioned vessel, it could enable deeper draft manned ships to operate at safer standoff ranges. Also, by pushing the limits of technology, larger surface drone ships could potentially bring unprecedented amounts of endurance. Not only would they not need to constrain mission dwell time by a need to return human crews, but larger drones could potentially carry more fuel, supplies and ammunition. These missions also include things like perimeter security, wherein unmanned armed surface vessels are forward-deployed to identify and attack approaching targets, all while protecting larger vessels such as Littoral Combat Ships or Carrier Strike Groups and Amphibious Ready Groups.

While the initial priorities for the Navy’s emerging fleet of coordinated surface drones include intelligence, surveillance, and reconnaissance, targeting and AI-enabled autonomous operations, the Navy is also now exploring the possibility of adding weapons to the USVs. Naturally, weapons specifics regarding ongoing testing might not be available for security reasons, there are a number of potential weapons combinations which might seem suitable for USVs.

The nearest-term applications might likely involve smaller, mobile attack weapons such as .50-cal machine guns, 57mm guns, other standard deck-fired weapons or even man-portable types of heat-seeking anti-air and surface warfare attack weapons. While an unmanned ship is certainly less likely to have Vertical Launch Systems for large interceptor missiles, it seems possible that smaller weapons and various deck-mounted systems could easily integrate onto a medium- or large-sized surface drone. However, configuring a large surface drone to fire torpedoes might fall within the realm of the possible. This kind of weapons range, including the possibility of interceptors, various gun systems and some small remotely-fired missiles, could target enemy drones, lower-flying aircraft, attacking small boats and enemy ships at ranges otherwise more difficult to reach with ship-board sensors and weapons.

Some key elements of the value added by the Navy’s fast move to add more USVs seems to have been anticipated by a 2013 RAND study called “U.S. Navy Employment Options for Unmanned Surface Vehicles.” As part of a detailed analysis of surface drone warfare, the RAND report seems to foreshadow what has emerged over the last five years. Among other things, the report sites Navy UVSs as having an autonomous ability to “counter fast attack craft.” The RAND study also specifies a number of specific combat advantages potentially provided by USVs, when compared to Unmanned Undersea Vehicles (UUVs) and aerial drones:

“USVs have greater potential payload capacity and endurance than comparably sized unmanned systems in other domains. They are able to use higher-density energy sources than UUVs (hydrocarbons instead of batteries), and, unlike UAVs, they do not need to burn fuel merely to maintain their vertical position; if desired, they can move relatively slowly for days or weeks without refueling.”

USVs could also potentially bring unprecedented electronic warfare possibilities. After all, one of the key drawbacks when it comes to electronic attack is the risk of an attacker giving their location away by virtue of emitting a broad, detectable signal. For this reason, the military services have been working with industry to engineer more narrowly configured electronic attack signals. Given this challenge, having an unmanned system conduct EW missions lowers risks to sailors who might be endangered should a signal be located by an enemy.