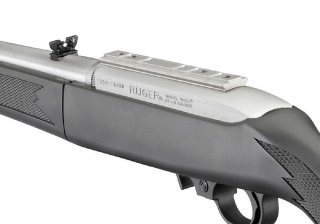 So it’s time to buy a new gun. Maybe it’s your first gun, or maybe you’re just bulking up your collection, and you’ve settled on a long rifle. No matter the reason, there’s a number of situations in life where you may find yourself needing to take your rifle with you, but it can be super inconvenient to tote around a long rifle with you. That’s exactly where the Ruger 10/22 Takedown comes in handy. With its ability to be broken down to half its size, this rifle is a fantastic option for portable plinking. However, portability is only a small part of the equations. Let’s take a look at how the 10/22 sizes up.

In terms of accuracy, the Ruger 10/22 is pretty on par with similar firearms in this category, and as with most .22lr, the ammo you use is going to make a huge difference in both the accuracy and the reliability. I tried several different brands of ammo through this rifle, and the results ranged anywhere from a 1” grouping with 40 grain Federal Target ammon, to a 5.8” grouping with Remington Yellow Jacket 33 grain hollow point. With that said, I also found that the fine line front sight could be a little difficult to see at times, so I could easily see that being a contributing factor to some of the variance in the accuracy. All and all, the accuracy is nothing to rave about, but it definitely holds its own. If you want to improve accuracy, I’d recommend adding a scope.

As I mentioned above, ammo selection will have a pretty big impact on the reliability of this rifle. Due to the dirtiness of the ammo and the sensitive rimfire ignition, reliability is an area where most .22LR’s tend to fall short. I had the best results using CCI ammunition, which ran at 100 percent, but also seemed to have good luck with Remington Thunderbolt and Federal Target ammo as well. Of course, you’re going to get jams every once in a while, but for the most part, as long as you keep it clean and try not to use the super inexpensive ammo and this rifle will keep on kicking.

I was fairly surprised at the easy handling of this rifle. One of its biggest appeals of the 10/22 is it’s fairly light weight and ability to be broken down, making it ideal for a packing gun. One of the things I found I liked the most about this Ruger was the checkered texture on the buttplate, as I found this helped the stock stay firmly in place on my shoulder while shooting. Beyond the decent handling while shooting, I really enjoyed how compact the whole package became once it was broken down and packed away. I personally don’t have much need for a pack away rifle like this, and storage space is not an issue for me, but I can absolutely see the benefits of being able to tote this rifle around, not only inconspicuously, but very conveniently. This would be a great survival rifle to throw in your truck to have with you whenever you may need it, without having it take up valuable storage space.

The trigger on the Ruger 10/22 Takedown is definitely not its strong suit. The single stage polymer trigger had about a 6 lb pull, but it didn’t break cleanly. It wasn’t nearly as crisp as what I would have liked, but this seems to be a downfall of most 10/22’s on the market. I would highly recommend an aftermarket trigger if you plan to shoot this gun often.

The Ruger 10/22 comes with a standard Ruger 10 round rotary magazine, but can easily be used with aftermarket extended magazines as well. Another common issue with .22lr is that the magazine releases are notoriously unreliable, but I found this one to work exceptionally well, allowing an empty magazine to drop easily when ready to reload. The placement of the paddle style release is convenient and well designed making reloading a breeze.

The biggest selling point of the 10/22 Takedown is its ability to be broken down to a smaller, most compact size for easy transportation. The overall length when fully assembled is 36.75”, with a barrel length of 16.62”. The weight on the other hand does leave a little to be desired. When fully loaded, the 10/22 comes in at just over 5 pounds. This is by no means a heavy rifle, but when the goal is for it to be a portable plinker, it doesn’t do much in the way of beating out its competition.

As with most .22’s, the recoil on the 10/22 Takedown is minimal at its worst. That’s one of the major benefits of a lower caliber rifle, and this model is no different. Any recoil that you might notice is absorbed well through the padding on the buttstock making this rifle very easy to handle and shoot. I think the fact that I don’t have much to say about the recoil, other than that it’s minimal, says a lot on its own.

The Ruger 10/22 is affordable. In fact, you can buy a brand new one for less than $400. For that price, you’ll also receive one small carry case that can be used to transport the rifle.

One of my favorite things about Ruger is the immense selection of compatible accessories. As much as I think this rifle runs pretty smoothly right out of the box, you can always improve it with added features.

I would highly recommend the Pro Mag Ruger 10/22 Archangel adjustable stock to get you started on customizing this rifle. This is a great option for not only shortening the overall length of the rifle, but also allows you to make sure it fits every shooter just right. I would also recommend replacing the trigger system to the Ruger BX trigger. This drop in upgrade is going to cost you less than most aftermarket options but still give you quite a step up from the trigger system that comes standard on this 10/22.

The Ruger 10/22 Takedown is a solid survival rifle that’s worth the money. To recap:

Reliability - As long as you keep it clean, it will consistently feed through even some of the cheaper ammo without frequent jams.

Portability - Being able to break it down into such a small and convenient size makes this gun great for backpacking, hiking, or just throwing in the back of your car or truck.

Easy Handling - Stays in place on the shoulder and has very minimal recoil.

Accuracy - The accuracy on this rifle had such a wide range of groupings (1” - 5.8”) depending on the ammo that was used that I can’t confidently call this rifle reliable in terms of accuracy.

Weight - At over 5 lbs when loaded, this is quite a bit heavier than many other competitors in this category.

In short, the Ruger 10/22 is a fun litter plinker rifle and home defense rifle that could be used for about anything. Especially when you factor in a price tag of under $400, I would absolutely recommend giving the Ruger 10/22 Takedown a try!