Ruger-57 Centerfire Pistol: What You Should Know 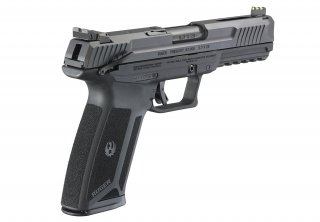 Sturm, Ruger & Company have come a long way since the days of the Ruger Standard Model, the rimfire .22 pistol the company introduced more than seventy years ago. This American firearms manufacturer has become the top-seller of handguns in the United States and with products such as the Ruger-57 it isn't hard to see why!

Introduced at the end of 2019, this new cutting-edge platform is a full-featured handgun wrapped around a standard capacity, twenty-round steel magazine and it is chambered in the high performance and low-recoiling 5.7x28-millimeter caliber cartridge.

What sets the Ruger-57 apart is that very unique cartridge, and according to Range365 this marks only the second time a handgun has been introduced for the FN Herstal round, which was developed in conjunction with the P90 personal defense weapon back in the 1990s. The Ruger pistol has some similarities to the FN Five-seveN, but it is still very much a new handgun for the 2020s and beyond.

This pistol is a handgun that is simply comfortable in the hand thanks to its impressive ergonomics. The Ruger-57's slender steel magazine is surrounded by a glass-filled nylon frame, which features an optimized texture and makes for a natural and ergonomic grip. Despite the longer 5.7x28mm cartridges, the trigger reach is actually no longer than many common 9x19mm Parabellum handguns.

More importantly, all of the controls are easily accessible, much like the 1911-style ambidextrous manual safety, robust slide release and the reversible magazine latch.

The advantage of the 5.7x28mm cartridge is its superior ballistic performance, which offers flat-shooting, while the lighter weight projectiles have significantly less felt recoil than the 9mm – and that in turn can lend itself to quicker sight reacquisition.

The handgun is 8.65 inches long and weighs in at 24.5 oz., unloaded. It also comes in a lockable hard case with two 20-round or 10-round steel magazines.

It is a sleek and modern handgun that has its own unique sense of "style." The through-hardened, billet steel slide with lightening cuts features enhanced front and rear cocking serrations. The steel barrel features a black nitride treatment for wear resistance, and the fire control housing is precision CNC-machined from anodized aluminum.

"The Ruger-57 is destined to become one of America's favorite handguns," said Ruger President and CEO Chris Killoy at the time of the pistol's release last year. "This pistol is soft shooting, accurate, powerful and just plain fun to shoot."

While that could be a tall order given the unique caliber – and it isn't likely that 5.7x28mm cartridges are widely available and likely won't be for some time, for those who dare to be a little different at the shooting range the Ruger-57 could be an ideal option.

For another take on the Ruger-57 check out what Richard Douglas had to say earlier this week for The National Interest.