Ruger 57: Why It Might Be the Best Gun You Will Ever Own 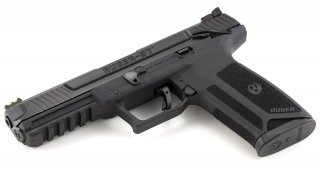 Catching the world by surprise, Ruger revealed the second-ever pistol to use the 5.7x28mm cartridge. Its only competition is the original FN Five-seveN. Even then, the Ruger-57 enters the market at a much lower price point.

For most consumers, this makes a somewhat niche caliber much more accessible, and for good reason. The Ruger-57 is a blast to use, acing every category I’ve tested it in. Ruger markets their newest pistol as “fun to shoot; cool to own,” and I don’t disagree.

The Ruger-57 features a bright-green front sight with all-black, adjustable rear iron sights. While shooting, it’s absurdly easy to keep track of the sights because of how easy the gun is to handle.

In addition, this full-size pistol comes pre-threaded to mount optics, with red dot sights available to purchase separately. This is another point in favor of the Ruger-57 over the FN. The fiber-optic sights, as well as the length of the barrel, combined with the amazing 5.7 x 28-millimeter ammunition, make it a breeze to hit targets accurately even twenty yards away.

It’s definitely fun for a day at the range, and could even be taken out for small game or varmints. If you’re a beginner, however, you’ll definitely want to find a proper hunting rifle.

Though it enters the market as Ruger’s affordable version of the Five-seveN, this pistol is anything but cheap. The grip is glass-filled nylon, while the slide and magazine are steel, making this remarkably lightweight while still feeling solid.

This might be surprising for those who view Ruger as an “affordable” brand but their weapons hold up to high standards of reliability. In my experience with the gun, it had no issues whatsoever throughout a day at the range. It’s still fairly new to the market, however, so time will tell.

If you aren’t considering buying this weapon, then you will once you get your hands on it. The first thing you’ll notice is that it’s shaped differently than 9-millimeter pistols, due to the 5.7 x 28-millimeter ammunition. Despite that, it still fits comfortably in your hand.

The textured grip is just right, providing a solid handle on the weapon while still remaining comfortable. Depending on the size of your hands, you might find the magazine release awkward to hit due to the size and shape of the Ruger-57, but otherwise, this full-size pistol handles much like any other.

Shooting the 57 will sell you on it immediately. This gun shoots like a dream, with a satisfying flash and bang, but with a recoil that’s easy to handle. After taking a shot, you can easily center the sights again and take another, and the 20+1 capacity makes you want to fire again and again.

The Ruger-57’s trigger is easy to reach despite the size of the gun due to the narrow grip design. The trigger itself features an integrated safety to prevent accidental discharges due to impact. Even with the safety, the trigger felt comfortable and didn’t tire my finger out at the range.

Pulling the trigger requires about 4.5 pounds of force. It feels crisp and snappy and has a slight positive reset that may take some getting used to.

The magazines that come with the Ruger-57 are steel and fit twenty rounds in an efficient double-stack. It’s always surprising to find a pistol that loads twenty rounds, especially one that’s so smooth and easy to fire.

Loading a magazine is easy, and feels just like loading an AR pistol. So if you’re used to handling an AR pistol, you should have no problem with the different caliber.

Ruger included a textured cutout at the bottom of the grip, which helps with gripping the magazine. As stated earlier, the magazine release was a little awkward to hit from a standard grip, but men with larger hands might not find this an issue.

Due to its nylon frame, the Ruger-57 is remarkably light when empty, weighing only 24.5 oz. Regardless, the steel slide gives it enough heft to handle recoil much on its own.

Due to the shape of the 5.7 x 28-millimeter magazine, the grip is longer than your average pistol. Ruger compensated by making the grip thinner, making the 57 surprisingly easy to hold. It’s certainly a full-size pistol with its 4.94-inch-long barrel, making it not the ideal choice for concealed carry.

For a gun as powerful as the Ruger-57, the sights barely move. It’s remarkably easy to shoot, and before long you’ll find that your entire twenty-round magazine has been spent.

In terms of felt recoil, the 57 kicks a bit more than a .22, but less than a 9-millimeter. For the amount of punch the bullets have, this is incredible. Even with the light recoil, the blast and flash of discharge feel impressive.

Quite possibly the only drawback of the Ruger-57 is its price, which is still pretty reasonable. While at $799 it’s pricier than most pistols you would buy, its only competition in the market of 5.7 x 28-millimeter is the FN Five-seveN, which sits way up at $1,199.

The obscurity of the ammunition doesn’t necessarily help its case, however, as the fairly esoteric 5.7 x 28-millimeter magazine is rather difficult to find. On the other hand, Ruger introducing this new gun might encourage more manufacturers to start selling this ammo, making it less rare for consumers in the future.

In terms of practical use, most may find the Ruger-578 large for concealed carry, so you might want to find a more suitable firearm for that purpose. However, it’s still a strong pick for home defense or even small game. At the end of the day though, you’ll love bringing this pistol to the range.

With that said, if you’re in the market for a pistol that handles like a dream and are interested in expanding to a new caliber of ammo, then this is for you. The Ruger-57 will, without a doubt, be one of the most fun pistols you shoot.