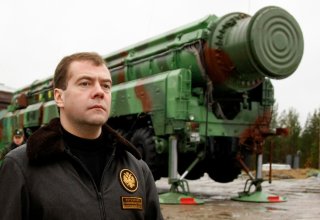 The recent round of tensions in the consistently difficult relationship between Russia and the U.S. has prompted a renewed focus on the Kremlin’s nuclear posture. For years, Western analysts have posited that Moscow adheres to what is often called an “escalate to de-escalate” approach. But what does this mean in concrete policy terms, and is it an accurate description of Russia’s nuclear doctrine?

The phrase “escalate to de-escalate” first surfaced in the summer of 2015. As noted by Kevin Ryan, associate fellow at Harvard Kennedy School’s Belfer Center, the phrase originated in American—rather than Russian—defense discourse. The core idea behind “escalate to de-escalate” is, simply, that Russia is now willing to engage in a limited nuclear war in order to win—that is, end—a conventional conflict.

Deputy Secretary of Defense Robert Work and the vice chairman of the Joint Chiefs of Staff, Adm. James Winnefeld, invoked “escalate to de-escalate” during a testimony to the House Committee on Armed Services: “Russian military doctrine includes what some have called an ‘escalate to deescalate’ strategy—a strategy that purportedly seeks to deescalate a conventional conflict through coercive threats, including limited nuclear use. We think that this label is dangerously misleading. Anyone who thinks they can control escalation through the use of nuclear weapons is literally playing with fire. Escalation is escalation, and nuclear use would be the ultimate escalation.”

“Escalate to de-escalate” surged in popularity during the Trump years, penetrating key U.S. defense documents. “Moscow threatens and exercises [i.e., rehearses] limited nuclear first use, suggesting a mistaken expectation that coercive nuclear threats or limited first use could paralyze the United States and NATO and thereby end a conflict on terms favorable to Russia,” reads the Defense Department’s 2018 Nuclear Posture Review. “Some in the United States refer to this as Russia’s ‘escalate to deescalate’ doctrine.”

Analysts have noted that the concept of using low-yield nuclear weapons to influence the course of a conventional conflict is not new, neither to Russia nor the US. A 2019 Defense Department guidance on Nuclear Operations discusses the possibility of limited nuclear war: “Employment of nuclear weapons can radically alter or accelerate the course of a campaign. A nuclear weapon could be brought into the campaign as a result of perceived failure in a conventional campaign, potential loss of control or regime, or to escalate the conflict to sue for peace on more favorable terms.”

Further still, there is little evidence that Russia plans to resort to limited nuclear war in all possible conventional conflicts. During a 2018 forum, Russian president Vladimir Putin offered the following clarification: “In our concept of nuclear weapons use there is no preemptive strike… Our concept is a retaliatory-offensive strike. For those who know, it’s not necessary to say what that is; for those who don’t know, I’ll say again: This means we are prepared to, and will use, nuclear weapons only when we are convinced that someone, a potential aggressor, is attacking Russia, our territory.” The Kremlin reaffirmed in a 2020 defense document that it will only consider the nuclear option under two circumstances: 1) as a retaliatory measure against the use of nuclear weapons or other WMDs, or 2) when “the very existence of the state is in jeopardy.”

While “Escalate to de-escalate” is not wrong as such, the broader discussion surrounding it has been de-contextualized to an unsettling degree. It is true that Russia, like its U.S. counterpart, is willing to consider limited nuclear war under specific circumstances, but there remains no evidence that Russia’s nuclear-use threshold has suddenly been lowered.