Russia’s Deadly Status-6 Nuclear Torpedo: 1 Fact You May Not Know 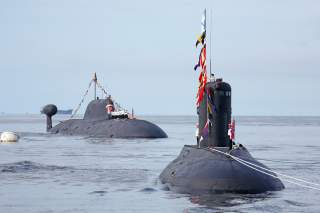 When Russia’s Status-6/Kanyon/Poseidon nuclear torpedo was revealed “accidentally” in 2015, it largely took the world by surprise. Many experts assumed that such apocalyptic weapons were abandoned after rounds of detente during the Cold War and the resulting arms control agreements. However, recent revelations in the Russian military watcher community have revealed that parts of the Status-6 have been in development since 1989, and continued during the early years of the Russian Federation.

This was enabled by the release of the GRAU index (a three to four character code that almost every Russian and Soviet weapon system is assigned) of the Status-6: 2M39. From that index, previous state orders and procurement decisions related to the project could be found in archives, revealing the history of the project bit by bit.

The big revelation was that the reactor for the Status-6 was under development in 1992, in Yeltsin’s Russia. The reactor was planned to be acquired under the 1989 procurement order and continued development at the “Rubin” plant during the early 1990s, despite Yeltsin’s supposed embrace of arms control. Orders for the Status-6 reactor were confirmed in June 1992, despite Yeltsin pledging to eliminate one-third of sea-based tactical nuclear weapons in January of that year.

Websites have speculated that the development of the weapon was initiated as part of a round of Soviet “wonder-weapons” at the time, which were meant to counter the U.S. investment in defense technology in the 1980s. Other projects around this time included the 1K17 blinding laser vehicle and early prototypes of hypersonic warheads. These weapons were envisioned to give the Soviet Union an overwhelming advantage in event of a war. As some Soviets put it, these weapons would allow them to sit on the porch of the White House the next day if war broke out.

In Yeltsin’s Russia, the project to develop this nuclear unmanned underwater vehicle (UUV) or torpedo was designated “Skif,” and full development commenced in June 1992. The first prototypes started to appear in the late 2000s, with Skif prototypes undergoing hydrodynamic testing. Full size tests later occurred in 2008, with prototypes being towed behind the rescue ship “Zvezdochka” and loaded in the B-90 Sarov test submarine. Photos of these prototypes were seen on the web around the early 2010s as testing continued, but few knew what the vessels were at the time.

The torpedo was finally leaked in 2015 in a NTV report, where a page showing an overview of the torpedo and its capabilities was shown. Russia officially acknowledged the existence of the Status-6 on March 1, 2018.

Now in 2019, the Status-6 is nearing operational status. One of the first submarines that could carry it, the Project 09852 “Belgorod,” is to be launched on March 19, 2019: the Day of the Submariner in the Russian Federation. The 09852 will be followed by the Project 09851 “Khabarovsk,” which began construction in July 2014. As such, the training and support infrastructure for Status-6 is likely being put into place.

While the deployment of nuclear weapons on submarines as a deterrent capability is nothing new, the hard-to-detect nature of a Status-6 launch combined with the massive size of the warhead significantly complicate the calculus of deterrence. While the fielding of such a weapon in the 1980s might have made sense, with Reagan’s Strategic Defense Initiative threatening to make conventional nukes obsolete, Russia’s decision to continue the development of the capability through the 1990s to the present day should raise eyebrows.